Addicted To You by Krista & Becca Ritchie 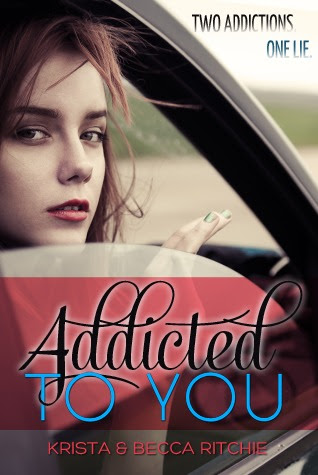 
Synopsis: (from Goodreads)
No one would suspect shy Lily Calloway’s biggest secret. While everyone is dancing at college bars, Lily stays in the bathroom. To get laid. Her compulsion leads her to one-night stands, steamy hookups and events she shamefully regrets. The only person who knows her secret happens to have one of his own.

Loren Hale’s best friend is his bottle of bourbon. Lily comes at a close second. For three years, they’ve pretended to be in a real relationship, hiding their addictions from their families. They’ve mastered the art of concealing flasks and random guys that filter in and out of their apartment.

But when they go on a family boat trip, surrounded by open seas and limited male bodies in sight, Lily’s confronted with a big fear. Only one guy onboard can fill her addiction, and she’s sworn off going there with Loren Hale ever again.

Now the only person who can truly help her can barely help himself.

My Thoughts:
The first thing that comes to mind when I think about this book is “super intense”. It’s definitely a serious read, and very different from any other New Adult title out there that I’ve read. It’s interesting because it’s not really a romance at all, although there is a bones deep soulmate level of connection between Lily and Lo. This a book that deals with sex addiction, and something on this subject matter could easily become tawdry and seem like it's meant to be titillating -- thankfully that’s not the case here. The book presents Lily’s condition as a true addiction, with cravings and destruction just like an addiction to drugs would have.

Lily and Lo are two fairly damaged individuals who care about each other, but who have gotten into the habit of enabling each other. Even though they adore each other, their addictions have become the most important thing in their lives. The story ‘Addicted to You’ tells is very enthralling. I especially liked the inclusion of Connor and Ryke: these are characters who break into Lo and Lily's seclusion, slowly becoming entrenched in their lives.

When I finished the book I felt like it did have an ending, but I still wished for more details or direction about how Lily would seek more help for her addiction. Thankfully this wasn’t an oversight, and it appears that the authors are writing more books about these characters. ‘Addicted to You’ is a truly unique story, one that's tough to read at times, but is also very interesting and well written.

Add Addicted To You by Krista & Becca Ritchie on Goodreads. Purchase on Amazon, B&N, Kobo, or Smashwords.