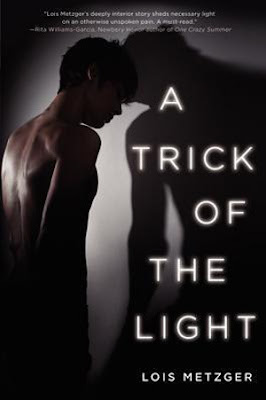 A Trick of the Light by Lois Metzger


Mike Welles had everything under control. But that was before. Now things are rough at home, and they’re getting confusing at school. He’s losing his sense of direction, and he feels like he’s a mess.

Then there’s a voice in his head. A friend, who’s trying to help him get control again. More than that—the voice can guide him to become faster and stronger than he was before, to rid his life of everything that’s holding him back. To figure out who he is again. If only Mike will listen.

Telling a story of a rarely recognized segment of eating disorder sufferers—young men—A Trick of the Light by Lois Metzger is a book for fans of the complex characters and emotional truths in Laurie Halse Anderson’s Wintergirls and Jay Asher’s Thirteen Reasons Why.

Guest Post:
How a Voice in Someone's Head Became the Narrator in "A Trick of the Light"
By Lois Metzger
When I began writing "A Trick of the Light," it was a much more traditional narrative. My character, Mike Welles, told his own story. He was fifteen, a tenth-grader, a right-fielder on the baseball team, and having a rough time.

The book used to begin with the scene at the flea market, now in Chapter Four, where Mike runs into Amber, a girl he barely knows though they've gone to the same schools together since kindergarten. Amber's a little strange -- she wears heavy, baggy clothes even in summer, and her hair hangs in her eyes, and out of nowhere she brings things up abruptly, like the fact that she and Mike used to be butterfly partners in third grade. Mike wants to get away from her, but suddenly a voice in his head tells him he should talk to her, he should be friendly.

Told in first person, Mike said something like, "There's this voice in my head. It just told me to talk to Amber. What's that all about? Am I crazy?" In this early version, Mike tried to ignore the voice but it kept interrupting his thoughts and actions. And Mike had to keep acknowledging that: "I was trying to watch a movie but the voice wouldn't leave me alone." As the book went on, Mike listened more and more to the voice, and less and less to the people around him. In first-person, this was getting awkward. How could Mike say what basically amounted to: "I'm being taken for a ride here, and I think it's wonderful but really it's killing me"? The reader has to realize that, not Mike.

So I tried writing the book in third-person, hoping this would give me a little distance on Mike ("He had a voice in his head," etc.). That, I thought, might let me show the "real" Mike, as opposed to the Mike that only existed in his own mind. But this version was problematic as well. I still wound up saying things like, "Mike looked in the mirror and saw a six-pac, but really he was emaciated." Not too subtle!

I also tried writing the story from Amber's point of view, but Amber only saw Mike at school or sometimes after school; she never saw Mike when he was alone (of course: if she was there, he wouldn't be alone!). At one point I tried having Mike's mom tell the story, but she really didn't know the extent of what was happening to Mike, not until it was too late. I also tried using Mike's best friend as narrator. I even tried his physics teacher!

But a strange thing was happening during all these rewrites. The voice became much more of a presence. It was "talking" nearly all the time and taking up nearly all the space in the book. Finally, one day, while I was working on a particularly difficult scene, the voice took over, almost as if it was telling me, the writer, "Just let me handle it."

Not that I didn't question this. It was definitely weird, having a voice in someone's head narrate an entire book. But it felt strangely right. The voice was very confident (one of its qualities). The voice had a strong personality (if you can say that about a voice). The voice had a very specific way of seeing the world. All that is very useful to a writer. When this happens, you've reached where you know how that character would react in any situation. For instance, when Mike watches stop-motion movies with his best friend, he's having a great time. But the voice, of course, is bored and restless. For the reader, this makes a nice contrast and helps you get to know both Mike and the voice at the same time.

The voice may not be a loveable narrator -- far from it -- but I love the voice. It helped me tell Mike's story the way it needed to be told. 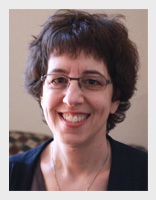 About Lois:
Lois Metzger, author of A Trick of the Light, was born in Queens and has always written for young adults. She is the author of three previous novels and two nonfiction books about the Holocaust, and she has edited five anthologies. Her short stories have appeared in collections all over the world. Her writing has also appeared in The New Yorker, The Nation, and Harper's Bazaar. She lives in Greenwich Village with her husband and son.

Thanks so much for sharing that with us, Lois! I loved hearing about your process, and I find it so interesting how many different types of narrators can exist.