Only For You by Beverley Kendall

Note: This book was previously published under the title "When in Paris" 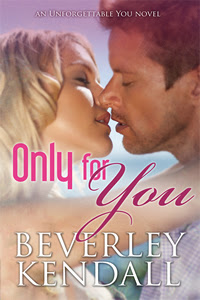 
Synopsis: (from Goodreads)
College freshman Olivia Montgomery is thrilled at the chance to start over, escape the rumors that plagued her in high school. And she can finally put her juvenile crush, Zachary Pearson, where he belongs--in her past. Then her unrequited love strolls into her French class, shattering Olivia's newfound peace, and the feelings she'd thought buried for good come rushing back. Now she can't shake her unwanted attraction to the one guy who can twist her stomach into knots with just a smile...but has never given her the time of day.

Zach's good looks may have always gotten him his pick of girls, but it's the star quarterback's skill on the football field that gives him his pick of the Big Ten colleges. To escape the crushing demands of his win-at-all-costs father, Zach opts for a private university in upstate New York where...his present and past collide. And the one girl he's always wanted but can't have--and a class trip to Paris--turn out to be the ultimate game changer that has him breaking every one of his rules.

My Thoughts:
What’s this? A New Adult book with a non-player, non-tattooed, non-bad boy? Woohoo! Colour me shocked and amazed. I really enjoyed ‘Only For You’, particularly because there were real reasons and obstacles to keep the main characters at a distance from one another. So often in romance there’s a dumb misunderstanding that keeps the hero and heroine apart, so it was nice to see something original in that regard. I also liked how Olivia and Zach had a history of attraction but not speaking to one another.

It’s really important for me, especially in a romance, I think, to identify with the characters and understand their motivations and decisions, and I’m glad to say that was the case here, for the most part. There was one thing that I didn't get why Zach didn't just divulge the whole situation instead of skirting around it and having it lead to further misunderstandings, but it wasn’t anything big enough to cause me to dislike the book.

‘Only For You’ features straightforward writing with nice swoony bits and well developed characters, including the secondary characters. I really appreciated how the subplot of the secondary characters was woven throughout the whole book instead of just having a few mentions here and there like a lot of companion series books do. It was enough to make you interested in reading the next full length novel, but not too much where you felt like this book was incomplete without resolving that plot. Overall I just really enjoyed this book, a lot more than most New Adults I've read in the past little while.

The Cover:
Not bad, but the models looks way too old for the characters.

Find Only For You by Beverley Kendall on Goodreads & Amazon.