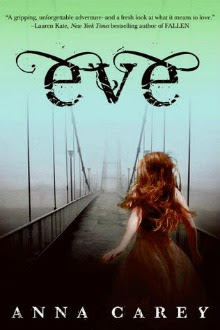 Synopsis: (from Goodreads)
The year is 2032, sixteen years after a deadly virus—and the vaccine intended to protect against it—wiped out most of the earth’s population. The night before eighteen-year-old Eve’s graduation from her all-girls school she discovers what really happens to new graduates, and the horrifying fate that awaits her.

Fleeing the only home she’s ever known, Eve sets off on a long, treacherous journey, searching for a place she can survive. Along the way she encounters Caleb, a rough, rebellious boy living in the wild. Separated from men her whole life, Eve has been taught to fear them, but Caleb slowly wins her trust...and her heart. He promises to protect her, but when soldiers begin hunting them, Eve must choose between true love and her life.

My Thoughts:
Sometimes when I go to review a book I have these great ideas about what I want to say and I know exactly how I feel about the book. Not so with ‘Eve’. I’m still not exactly sure how I feel about it, perhaps because my feelings are somewhat so-so. I didn’t love it, but I didn’t dislike it either. When you think of post-apocolyptic and dystopian stories you usually think of a lot of world building and complex situations, but I think there’s another type of story within these genres and that’s a more personal narrative.

‘Eve’, to me, is one of these personal narratives. The main character is escaping from a situation put into place by a larger regime, but she starts off clueless about the world and what’s actually going on. It’s more believable, then, when Eve is naive and has to learn about all the deceptions that have existed in her life. I’m not sure I completely buy how she initially finds out about the truth, but at least it’s believable that she’s clueless because of the closed environment she’s grown up in.

This is a pretty quick read and there’s lot of action, yet for some reason, despite all the bad things that go on, I never felt like the danger was quite present. I always believed Eve would be okay and would escape, and that made reading the book less interesting. The romance? Eh. Caleb and Eve are cute together, but it was definitely an insta-relationship. I found myself more interested in the dynamic between Eve and Arden, another girl who has escaped the school where the two of them grew up.

As I mentioned I definitely didn’t dislike this book, and I even enjoyed the reading experience in general. The ending was a bit predictable, though, and I have to say I found it melodramatic, almost self-sacrificing of one character. Perhaps that’s just my interpretation of the events, but it just seemed strange. One very positive thing about the book is that it actually has a pretty concrete ending. You know there’s more to the overarching story, but the specific narrative of Eve’s journey reaches completion, which made me very happy. Overall I think you’ll have to judge this book for yourself. Some people are raving about it and some people are slamming it. Me? I suppose I’m on the fence. It’s worth reading, but I wouldn’t go in with especially high expectations.