If I Tell by Janet Gurtler 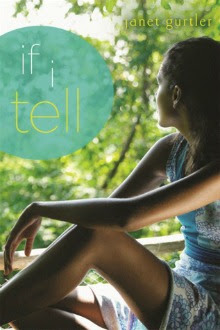 Synopsis: (from Goodreads)
Jasmine Evans knows one thing for sure... people make mistakes. After all, she is one. Jaz is the result of a onenight stand between a black football player and a blonde princess. Having a young mother who didn't raise her, a father who wants nothing to do with her and living in a small-minded town where she's never fit in hasn't been easy. But she's been surviving. Until she sees her mom's new boyfriend making out with her own best friend. When do you forgive people for being human or give up on them forever?

My Thoughts:
When I finished this novel I thought to myself “How come more people didn’t tell me how awesome Janet Gurtler’s writing is?!”. She totally has my favourite type of contemporary voice, a la Sarah Dessen, Elizabeth Scott, and Deb Caletti. And those three are some of my favourite contemp writers, so that is a massive compliment.

‘If I Tell’ originally intrigued me, but its concept didn’t necessarily appeal to me. I mean, the girl sees her Mom’s boyfriend kissing her best friend?! It sounds pretty sketchy. And, well, it is sketchy, but it’s also not exactly what it seems. I think you can view the whole book based on the “it's not all black and white” theme, one which occurs on two levels. First there’s Jasmine (Jaz) grappling with knowing people and figuring out that people aren’t always what they seem. Then secondly there are literal black and white issues, with Jaz trying to deal with her mixed race heritage in a small town where people who are black and people who are white just don’t mix.

Jaz’s identity issues made up a much larger portion of the book than I would have guessed based on the description, but I was very intrigued by the whole scenario. I went to an incredibly racially diverse high school, so it was hard for me to understand why Jaz’s classmates, and even people throughout the town, made such a huge deal out of her being half black and half white. Jaz’s journey to understanding and appreciating her heritage as well as gaining self-esteem was at times difficult to read about, but it was beautifully done.

This book just feels like a perfect example of contemporary YA because it has a little bit of everything. There’s friendship (how cool was Ashley? I loved seeing a character with my name who wasn’t a bitchy cheerleader or ditzy fashionista), romance (Jackson! seriously cute), family, identity issues, and a specific plot point (should Jaz tell?) to wrap the whole thing together. I enjoyed this book so much, and I really felt for Jaz throughout the whole novel. If you’re a fan of contemporary YA, Janet Gurtler is definitely an author to keep an eye on.

The Cover:
Pretty; I like the colouring and the circle aspect of it.

Find If I Tell by Janet Gurtler on Goodreads, Book Depository, & Amazon.