Here are Brian's thoughts on writing:
I view writing a lot like how others view exercise—if I turn the practice into a daily ritual, after a while, it will feel as typical as eating breakfast and doing laundry. I don’t want to view writing as a chore in any sense; after all, it’s supposed to be fun. But facing that blank page every day is certainly daunting, and many wannabe writers feel too threatened by it to face the task of writing his or her first novel.

I was that way for a long time. I tried to write a novel once in high school, but felt too unsure of myself after five or six chapters, and I abandoned the project. I wrote short stories and screenplays over many more years but always felt too intimidated by the task of writing a novel to attempt it. Finally, after becoming inspired by an idea that I knew would work best not as a short story or feature script but as a book, I knew it was time to write my first novel. I was certainly scared, but one great man prepared me with some excellent advice, and that man was Stephen King.

For any aspiring writers out there, I recommend wholeheartedly Stephen King’s fantastic nonfiction book about writing, titled simply On Writing: A Memoir of the Craft. In it the bestselling horror novelist not only discusses how he got his start writing and selling his books, but also discusses concise, important writing tips for budding novelists everywhere. I’ve read this book probably ten times over in the last few years, and I’ve tried to take most, if not all, of King’s advice in regards to sentence and story structure, grammar, dialogue, and, most of all, daily writing tasks.

What kept me for many years from tackling the seemingly enormous task of writing a novel was that it seemed next to impossible. It’s hard enough to write a short story. How in the world could I write a 70,000-word-plus novel? King spelled it out clear: write 2,000 words a day, every day, until you finish your first draft. A lot of writers, including myself, will work on a project for months and months, picking out hours at a time to do some writing, and then wait a week or longer to continue. It doesn’t matter what you want a write—a literary novel, chick lit title, YA paranormal romance, or horror rollercoaster ride—you can do it if you stop looking at the big picture and start looking at the small pieces.

I started writing my first novel Slate, influenced by the two years I spent working in feature film casting in Los Angeles, in early 2010, and looked at the task with both anticipation and trepidation. I had a brief outline of the plot, knew the first few chapters, the last few chapters, and some meat of the story in between, but I definitely didn’t know exactly how every storyline and character arc would play out. But I decided that I would start writing at least 2,000 words a day, every day, until I either finished the book, or died trying. The writing of my first book was difficult at times, yes, but it also turned out to be the most freeing and joyful experience of my creative life. When I finished the first draft, which stood at 108,000 words, I knew I had accomplished something special. But little did I know then, that the work of writing the book had only just begun.

That leads me to the important of revisions. Writing a novel is a process, a long one that takes months and months, and for some, years. If the hardest part about writing a book was completing that first draft, a lot more people would be doing it. But finishing the first draft is the first of many, many steps that will lead writing to a polished novel. I didn’t know it at the celebratory time I finished the first draft of Slate, but I ended up revising the novel in full over ten times in the course of the following year until I finally published it in March. My rewriting process begins like this: finish the first draft, print it out, put it in a binder, and don’t look at it for at least four to six weeks. I love to finish a project, put it away, and then work on something else for a while. Then, when I pull that first draft out of the drawer, it’s almost like reading something I didn’t write! It’s a great thrill, and it allows me to look at the words on the pages with a fresh eye.

I’ll spend a few weeks working on the second draft, and then put the manuscript away again. I’ll do this time and time again for six months to a year until I feel the material is ready to show to my closest friends and any fellow writers who’ll agree to review my work. After taking and using much of the feedback I receive, I’ll do one final polish, and finally prepare the work for eBook and print publishing (a whole other beast of a process!).

Happy Birthday to Me is my debut Young Adult novel, and it was something that I’d wanted to write for a long time. After my joy in writing my first book Slate, I knew I wanted to continue writing novels, and Happy Birthday to Me felt like the perfect second project. I spent nearly nine months working on this book, finally publishing it in April. It’s a funny, romantic supernatural tale that is truly for readers of all ages, and I’m so dedicated to this story and these characters that I am currently writing a sequel!

Eighteen months ago I wasn’t sure if I could even finish a novel. Today I’ve written three novels, I’m working on my fourth, and I’ve outlined nearly fifteen projects to be written in the next three to four years. I’ve become a writing fiend, and I’ve never been happier. I have Stephen King to thank for his inspiring wisdom, and all the readers and writers out there like me who love a great story. 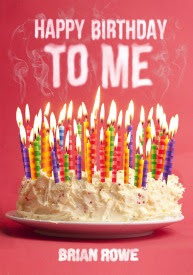 Seventeen-year-old Cameron Martin has a huge problem: he’s aging a whole year of his life with each passing day!

High school is hard enough; imagine rapidly aging from seventeen to seventy in a matter of weeks, with no logical explanation, and with prom, graduation, and the state championship basketball game all on the horizon. That’s what happens to Cameron, a popular pretty boy who's never had to face a day looking anything but perfect.

All Cameron wants to do is go back to normal, but no one, not even the best doctors, can diagnose his condition. When he finds love with a mysterious young woman, however, he realizes his only hope for survival might be with the one person who started his condition in the first place...

Thanks so much for stopping by, Brian!