The Son of Neptune by Rick Riordan 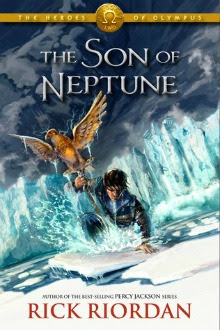 Synopsis: (from Goodreads)
In the first pages of this standalone sequel to The Lost Hero, Percy Jackson remembers only his name and the name of Annabeth, a mysterious woman he associates somehow with the city of San Francisco. From those sparse clues, he must somehow complete a mission for the leader of the Roman camp even as he is being pursued by the two sisters of Medusa, who possess an apparently unquenchable thirst for vengeance: Even when killed, they spring back to life. Rick Riordan's second Heroes of Olympus promises even more excitement than the first.

My Thoughts:
When I was reflecting on how much I enjoy Rick Riordan’s books, I decided that the greatest thing about them is that they are enjoyable for so many different age groups. I could hand it to a 10 year old and there would be jokes that kids that age would find especially appealing, yet there is a complexity to Riordan’s books which appeals to adults as well. The books don’t talk down to kids, and with all the great characters, the action, and the mythological base to the story, the books are completely awesome for every age.

It’s hard to write a coherent review for this specific book, or even for the series, because I had such a good time reading it. I adored the Percy Jackson books and I think I like the Heroes of Olympus books just as much, if not more. I loved Jason, Piper, and Leo in the first book, and I loved Hazel and Frank in this one. And then there’s the fact that Percy is a main character in this book, which was awesome. It was so fun to come back to that character and see things from his perspective again. Riordan has a real gift for making you fall in love with his characters and really care about their well being.

Reading about Camp Jupiter and seeing the Roman side to things was quite interesting, and I can’t wait to see what happens when the Greeks and Romans come together in the next book. There are so many great moments in 'The Son of Neptune', but I can’t really mention too many of them without being spoiler-y. I will say this: keep an eye out for Ella the harpy, because she is just so sweet and also hilarious, as well as when the Amazons make an appearance using Amazon.com headquarters as a front (so, so funny and clever).

Basically, if you have an appreciation for heartfelt characters, intricate mythological plots, as well as lots of laughs and action then I think you will love this book and this series.

The Cover:
Pretty cool; I especially love it when covers represent actual scenes/details from the book.

Find The Son of Neptune by Rick Riordan on Goodreads, Book Depository, & Amazon.