Across a Star-Swept Sea by Diana Peterfreund 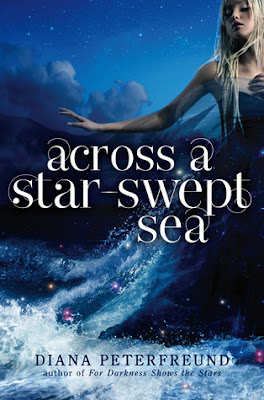 
Synopsis: (from Goodreads)
Centuries after wars nearly destroyed civilization, the two islands of New Pacifica stand alone, a terraformed paradise where even the Reduction—the devastating brain disorder that sparked the wars—is a distant memory. Yet on the isle of Galatea, an uprising against the ruling aristocrats has turned deadly. The revolutionaries’ weapon is a drug that damages their enemies’ brains, and the only hope is rescue by a mysterious spy known as the Wild Poppy.

On the neighboring island of Albion, no one suspects that the Wild Poppy is actually famously frivolous aristocrat Persis Blake. The teenager uses her shallow, socialite trappings to hide her true purpose: her gossipy flutternotes are encrypted plans, her pampered sea mink is genetically engineered for spying, and her well-publicized new romance with handsome Galatean medic Justen Helo… is her most dangerous mission ever.

Though Persis is falling for Justen, she can’t risk showing him her true self, especially once she learns he’s hiding far more than simply his disenchantment with his country’s revolution and his undeniable attraction to the silly socialite he’s pretending to love. His darkest secret could plunge both islands into a new dark age, and Persis realizes that when it comes to Justen Helo, she’s not only risking her heart, she’s risking the world she’s sworn to protect.

In this thrilling adventure inspired by The Scarlet Pimpernel, Diana Peterfreund creates an exquisitely rendered world where nothing is as it seems and two teens with very different pasts fight for a future only they dare to imagine.

My Thoughts:
To start off, can we talk about how much I love the main character, Persis? Because she is basically The. Best. If you need a reason to read this book (and there are many reasons why you should), Persis is a great one. She is such an amazing main character. I love that she has the fun, "fashionista" qualities that she shows to the world, but that she's also an incredibly intelligent person with a keen sense of justice. Persis is an active character: she sees something wrong, a terrible injustice, and she does something about it, even at great personal risk. I also loved the statement made by the author, of how easy it was for Persis to fool everyone into thinking she was stupid, because she’s pretty, rich, upper class, and - most of all - a female.

I give Diana Peterfreund major props for the subject matter of this book, because it’s incredibly complex. Even though Diana has done a great job at making things fairly basic and accessible, it’s still a story based on genetics and a complex history of persecution. At first it was a bit difficult to keep things straight, particularly because of the different names used, but it was also incredibly fascinating. And science isn't the only subject matter of the book: there’s adventure with the Wild Poppy rescuing people, and there’s the relationship between Persis and Justen. I really like how this story is one with intricate details you need to pay attention to, while at the same time offering humour and swoony moments.

While I enjoyed For Darkness Shows the Stars, especially the unique ideas of the story, I never fell for it in the same way many others did. I was excited when the characters in this book captured my attention so much more. There’s just something about the characters here and the Scarlet Pimpernel inspired plot that I loved.

[Also, a note, because many people seem to be confused about this: Across a Star-Swept Sea takes place in the same universe as For Darkness Shows the Stars, but it is very much a standalone novel. There is a bit of a crossover (which I won’t spoil!), but you don’t need to read the other book to understand or appreciate this one.]