How To Love by Katie Cotugno 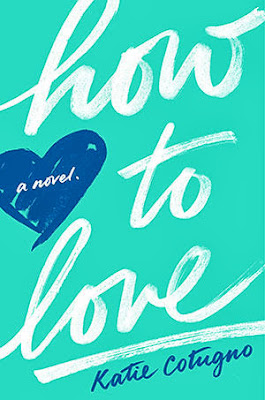 
Synopsis: (from Goodreads)
Before: Reena Montero has loved Sawyer LeGrande for as long as she can remember: as natural as breathing, as endless as time. But he’s never seemed to notice that Reena even exists…until one day, impossibly, he does. Reena and Sawyer fall in messy, complicated love. But then Sawyer disappears from their humid Florida town without a word, leaving a devastated—and pregnant—Reena behind.

After: Almost three years have passed, and there’s a new love in Reena’s life: her daughter, Hannah. Reena’s gotten used to being without Sawyer, and she’s finally getting the hang of this strange, unexpected life. But just as swiftly and suddenly as he disappeared, Sawyer turns up again. Reena doesn’t want anything to do with him, though she’d be lying if she said Sawyer’s being back wasn’t stirring something in her. After everything that’s happened, can Reena really let herself love Sawyer LeGrande again?

In this breathtaking debut, Katie Cotugno weaves together the story of one couple falling in love—twice.

My Thoughts:
How To Love was such a different book than I expected it to be, especially after seeing so many people raving about it. The book was less actual romance and more about two people being in the same orbit, but on totally different trajectories. It’s a portrait of Reena, a girl who has generally always been the good, smart girl, but who lets herself do some pretty dumb things in the name of a boy who she's been obsessed with for forever.

I like reading “Before & After” stories, but it doesn’t always work to have those perspectives interspersed. I feel like the story was mapped out pretty well here, but because of the characters I had a hard time connecting with it. I feel like Sawyer was supposed to be this bad boy who you couldn't help but love because of how charming he was, but I didn’t feel that way at all. I found Sawyer to be very troubled. He was smarmy and he didn't treat Reena right at all. There's not a lot (or anything?) redeemable about 'Before' Sawyer, which makes it harder to truly root for these two in the 'After' section. This is especially true because being around Sawyer makes 'After' Reena seem very childish. I did feel like Sawyer had changed, and I applauded that he wanted to stand up and be there, but it felt like “too little, too late”, most especially because he was so blasé about the past. This guy treated Reena terribly, just left her without any notice, and then he comes waltzing back in years later and doesn’t even take the time to apologize or explain or anything. Reena, on the other hand, always let 'Before' Sawyer walk all over her, and while she tries to change this in the 'After', I didn't see any real evidence of her making better choices. She's let everything fester under the surface, and she takes advantage of the good people in her life.

This is a slower moving story, one you need to unravel, and it's definitely more of a character study and an examination of a relationship than it is a plot-driven novel. I didn’t wholly dislike it (the writing style itself was great), but I think I just wanted a happier ending where both characters stepped up. I wanted Sawyer to actually admit his faults, and I wanted Reena to choose to grow up. I felt like we deserved something more than just the promise of hope after reading about such misery throughout the book.

The Cover:
It's gorgeous!!

Find How To Love by Katie Cotugno on Goodreads and HarperCollins Canada. Purchase through Book Depository, Chapters Indigo, Amazon.ca, & Amazon.com.