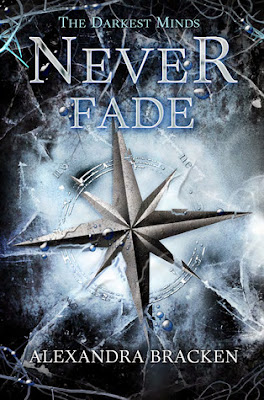 
Synopsis: (from Goodreads)
Ruby never asked for the abilities that almost cost her her life. Now she must call upon them on a daily basis, leading dangerous missions to bring down a corrupt government and breaking into the minds of her enemies. Other kids in the Children’s League call Ruby “Leader”, but she knows what she really is: a monster.

When Ruby is entrusted with an explosive secret, she must embark on her most dangerous mission yet: leaving the Children’s League behind. Crucial information about the disease that killed most of America’s children—and turned Ruby and the others who lived into feared and hated outcasts—has survived every attempt to destroy it. But the truth is only saved in one place: a flashdrive in the hands of Liam Stewart, the boy Ruby once believed was her future—and who now wouldn’t recognize her.

As Ruby sets out across a desperate, lawless country to find Liam—and answers about the catastrophe that has ripped both her life and America apart—she is torn between old friends and the promise she made to serve the League. Ruby will do anything to protect the people she loves. But what if winning the war means losing herself?

My Thoughts:
I absolutely loved The Darkest Minds, and I loved Never Fade just as much, if not more than the first book. In this second volume, Alexandra Bracken gives readers deeper world building: an even more in depth look at what things are like now and how they came to be this way. There’s a broader perspective shown as we’re introduced to a new group of people. While I very quickly grew to love this group, I was relieved and happy to keep track of the characters from the first book as well.

There are so many different reasons why this book worked for me. I love the way “super powers” are portrayed, the good and the bad. I love the journey of Ruby learning to hone and increase her abilities, and how she feels about them. I love the road trip element to these books, the journey and the action that takes place at every step. These books are long, but they don’t feel like it at all. They never drag, in fact they fly by. Mostly I love the relationships between characters, especially the friendship of two characters in particular. I love how the characters relate to one another, and the central story of Ruby’s personal journey.

Never Fade feels larger in scope than The Darkest Minds, as it takes on big issues. The characters want to fight back against the camps, and they’re trying to accomplish this while dealing with the outside world, but equally trying to avoid it. There’s just so much going on, and so much is set up for the third book, but it never feels too busy. The book is full of action and excitement, while still reeling you in with the characters and their individual emotions. I’m not often outwardly emotional with books, but Never Fade made me laugh and cry, almost equally. I can’t get enough of this series or its characters, and I’m so excited to see where Alexandra Bracken will take things next.