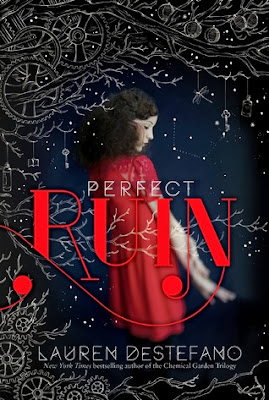 
Synopsis: (from Goodreads)
On Internment, the floating island in the clouds where 16-year-old Morgan Stockhour lives, getting too close to the edge can lead to madness. Even though Morgan's older brother, Lex, was a Jumper, Morgan vows never to end up like him. She tries her best not to mind that her life is orderly and boring, and if she ever wonders about the ground, and why it is forbidden, she takes solace in best friend Pen and her betrothed, Basil.

Then a murder, the first in a generation, rocks the city. With whispers swirling and fear on the wind, Morgan can no longer stop herself from investigating, especially when she meets Judas. He is the boy being blamed for the murder — betrothed to the victim — but Morgan is convinced of his innocence. Secrets lay at the heart of Internment, but nothing can prepare Morgan for what she will find — or who she will lose.

My Thoughts:
This book has a very slow start. I was intrigued by the world and what was happening, and I was definitely curious where things would go, but I wasn't fully involved with the characters for the longest time. I think this is because the majority of the book is very internalized to what Morgan is thinking and feeling. Much of the book is her musings about Internment, the edge, below, and how she feels about her brother and the others in her life. There's a bit of a mystery as things are happening and we're wondering who is committing crimes and why. This added a bit of action to the book, and made me keep reading.

While I never grew to love Perfect Ruin, it became more and more engaging as it went on. I don't want to spoil where the story leads, because it is such a journey to get there, but toward the end there's a lot more action and things happening, rather than just ruminating about them. It’s a bit frustrating, actually, that the book ends right when things were getting incredibly interesting, even though it was a logical stopping point for the book. While the beginning was a bit rough, I did like the characters enough that I’ll be continuing on to Book 2 to see where things go, and to get some explanations.

The Cover:
I don't care for the photograph, but the illustrated design (which continues inside the book) is gorgeous!