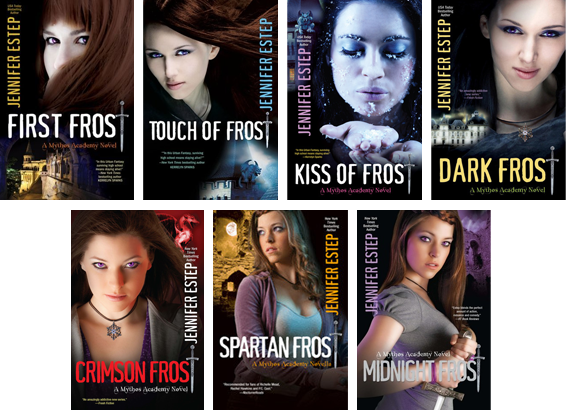 The Mythos Academy books focus on Gwen Frost, a 17-year-old Gypsy girl who has the gift of psychometry, or the ability to know an object’s history just by touching it. Gwen’s magic lets her see everyone who has ever touched or used an object as well as feel their emotions — the good, the bad, and the ugly.

After a serious freak-out with her magic, Gwen finds herself shipped off to Mythos Academy, a school for the descendents of ancient warriors like Spartans, Valkyries, and more. The academy is located in the fictional suburb of Cypress Mountain, North Carolina, and the kids there are training how to use their magic and various skills to fight Reapers of Chaos. The Reapers are some seriously bad guys who want to free the evil god Loki from his mystical prison so Loki can take over the world and enslave everyone.

Gwen doesn’t think that she belongs at the academy or that she’s any kind of warrior, but she’s wrong — and she’s a lot stronger than she realizes.

My Thoughts on the series:
I’ve been hearing great things about the Mythos Academy series for so long, that I finally had to take some time and read these books. I can see why people enjoy these books because they’re very reminiscent of Vampire Academy, the Covenent books, Harry Potter, and Percy Jackson. There’s mythology, a boarding school setting, a strong heroine, and different powers. What’s not to love?

Interestingly enough, Gwen got on my nerves quite a bit in the first couple books, but I liked her enough that I was still able to get into the books. Even though she drove me crazy, I kind of liked that she wasn’t all sunshine and rainbows. Her situation sucks, and her defense mechanism is to be snarky. Gwen is definitely very judgmental at first about the school and its students. She tends to make a lot of mistakes by being rash and jumping into things. What Gwen also is, is very lonely because of her gift, and therefore very loyal to the people she does have in her life. Gwen definitely grows as a character as the series continues and she becomes more willing to learn from others.

As you would expect in a mythology based urban fantasy type series the central theme is a fight against evil, Loki in this case. The boarding school that Gwen attends is full of warriors who have different abilities. Gwen is a chosen one, a champion for Nike, who has to figure out how her ability will help her in the fight against Loki.

The books feature lots of action, with some high stakes coming up occasionally. I definitely enjoyed reading the Mythos Academy books. I feel like the series keeps getting better, because while I liked the first couple of books, I didn't love them. But the next couple? A lot more exciting.

My Thoughts on Spartan Frost: (received for review from Netgalley)
This is a novella from Logan's POV, which makes it an auto-read from my perspective. While I liked hearing from him, I was disappointed that his thought process didn’t reveal anything particularly illuminating. The action sequence part was exciting, and I liked how the novella ended with you wondering what was going to happen next.

My Thoughts on Midnight Frost: (received for review from Netgalley)
This was an enjoyable story overall, and a good addition to the series. I liked the physical journey that had to take place, and how it showed how much Gwen has grown. Gwen started off claiming she didn't need anyone, and now she has all these friends who she’s willing to protect at all costs, including putting herself in danger.

What I didn't care for was that the overarching plot of the series (defeating Loki) didn't really seem to go anywhere in this volume. Of course there were bits and pieces, like gathering weapons that will help fight him, but besides that it didn’t seem like much happened in the big picture. I'm also getting tired of the big bad's henchwomen swooping in all the time and then flying away at the last second without getting hurt. It seemed unrealistic that they always get away, the other Reapers (aka bad guys) all die, and none of Gwen's “team” get mortally wounded, or even seriously hurt. While Gwen and her friends are obviously bad ass, and I don’t want them to die, I find it hard to believe that high school age kids are always better than the top trained enemy adults.

It seems like most of my thoughts on this book are gripes, but I honestly did enjoy it overall. I liked the Gwen/Logan interaction, and the journeying aspect of the book, like I mentioned. While this series isn’t my favourite, I still get a lot of enjoyment from it, and I’ll definitely continue on.

The Covers:
I like them in general, especially the first four. They fit the mood of the series well.