This Girl by Colleen Hoover 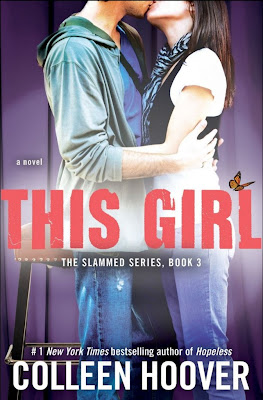 
Synopsis: (from Goodreads)
There are two sides to every love story. Now hear Will’s.

Colleen Hoover’s New York Times bestselling Slammed series has brought countless readers to their knees with a whirlwind of love, passion, and heartache.

Layken and Will’s love has managed to withstand the toughest of circumstances and the young lovers, now married, are beginning to feel safe and secure in their union. As much as Layken relishes their new life together, she finds herself wanting to know everything there is to know about her husband, even though Will makes it clear he prefers to keep the painful memories of the past where they belong. Still, he can’t resist his wife’s pleas and so he begins to untangle his side of the story, revealing for the first time his most intimate feelings and thoughts, retelling both the good and bad moments, and sharing a few shocking confessions of his own from the time when they first met.

In This Girl, Will tells the story of their complicated relationship from his point of view. Their future rests on how well they deal with the past in this final installment of the beloved Slammed series.

My Thoughts:
I mostly picked up this book because I was intrigued by idea of re-telling a whole book from the POV of the other romantic lead. I wondered how it could tell the whole same story and still be new. The answer is, unfortunately, it can't. At least not in this case.

I really liked Slammed and Point of Retreat, but I felt like they could get a bit melodramatic at times. Still, Layken is a teenager and a lot is happening in her life, so it's understandable to an extent. Of course since this was the same story I felt the same thing here, which is unfortunate, because you would think Will's perspective might be a little more mature or different. Unfortunately the whole book just felt like it was a retelling of Will mooning over Lake and wanting to kiss her, but not being able to, and it was just all so incredibly tragic, apparently.

While I did find the first two books a bit melodramatic I still enjoyed them because the whole cast of characters made everything interesting and balanced things out. Here the book just featured Will and Lake, and the flashbacks were basically monologues about Will and Lake exclusively. Maybe I'm heartless but it just felt boring for the most part. The highlight, for me, were some conversations that Lake didn’t know took place between Will and her Mom.

I feel like a bit of a downer reviewing this one, especially since I know there are so many die hard fans of the books. If you're a huge fan of the couple then you will probably love it. For me, though, the in between honeymoon scenes weren't enough to bridge the story together, and even some of those really weirded me out (Public hotel pool sex? Ick. There are ways exhibitionism totally works in romances, but that scene completely did not). The flashbacks felt disjointed and kept referring to moments or details from the past two books that I had a hard time remembering.

Did this one have its good moments? Absolutely, but those moments weren’t enough for me to enjoy the book overall.