The Chocolate Touch by Laura Florand 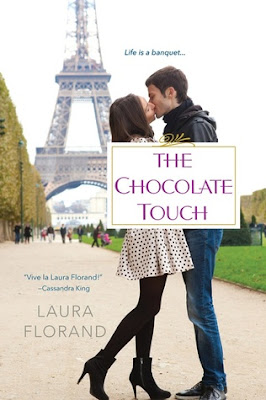 
Synopsis: (from Goodreads)
Dominique Richard's reputation says it all--wild past, wilder flavors, black leather and smoldering heat. Jaime Corey is hardly the first woman to be drawn to all that dark, delicious danger. Sitting in Dom's opulent chocolaterie in Paris day after day, she lets his decadent creations restore her weary body and spirit, understanding that the man himself is entirely beyond her grasp.

Chocolate, Dominique understands--from the biting tang of lime-caramel to the most complex infusions of jasmine, lemon-thyme, and cayenne. But this shy, freckled American who sits alone in his salon, quietly sampling his exquisite confections as if she can't get enough of them--enough of him--is something else. She has secrets too, he can tell. Of course if she really knew him, she would run.

Yet once you have spotted your heart's true craving, simply looking is no longer enough. . .

My Thoughts:
‘The Chocolate Touch’ is the fourth book in a series, though it can definitely be read as a standalone. I haven’t read any of the other novels (yet!), but I still understood the whole story, which makes sense as this fits the bill of many adult series, where the main characters change with each book. Still, I loved the connection to the other chocolatiers. The author did a great job connecting the books, explaining the relationships and including characters from past books. There were enough details that I understood what was going on, but not too many that I think past readers would feel overwhelmed with regurgitated information.

Right from the beginning of this book I felt like “sensual” was a good way to describe it. The writing style was beautiful, and you could feel the emotions of the characters so deeply. The book does delve into sexy scenes, but not ones as detailed as many adult romances have. Yet somehow these scenes were a thousand times hotter because of the true emotional connection between the characters. I mean, them talking about chocolate flavours was basically hotter than the love scenes in some books.

If you look at this book objectively the romance doesn’t seem like one I would enjoy. The whole “we’re both broken and will fix each other” type of relationship rarely works for me. While this romance technically fits that category, it didn’t feel like that at all. Dom and Jaime are just so connected right away on this deep, spiritual level. Both characters are insecure and find themselves lacking in some way. Neither of them feel like they deserve love or a happy relationship -- they don’t feel like they have anything to offer. Very quickly they prove each other and themselves wrong; they see how someone else values them, and they begin to see the value in themselves.

What I also loved was how Dom was a man with a violent past who didn’t use his upbringing as an excuse. He likes how most people see him as tough, but when it comes to Jaime he wants to protect her and cradle her gently. Dom initially thinks he can try to be perfect and hide all bad aspects of himself, but he still goes and seeks help from someone he’s seen in the past for advice on being in a relationship. He’s serious about putting his issues behind him and working at being the type of man Jaime deserves. Meanwhile, Jaime doesn’t think she can handle anything of substance, but very quickly just using Dom to replenish her emotional well-being is not enough.

I loved this book for the gorgeous writing and the emotional honesty of the characters. I fell hard for the characters, and I totally bought into their relationship, even though it technically falls into the insta-love category (another thing which usually drives me nuts). There was just something about Dom and Jaime that fit, and I could see them healing each other and teaching each other to love themselves. It didn’t feel like an emotional crutch, either; it was more about them showing the other person their true value.

If I had one tiny complaint about the book it would be that the ending seemed a bit abrupt. I’m satisfied with where it ended, but I still expected to read more about things that were discussed throughout the book and then didn’t occur within its pages. I did like the ending, but I also expected a bit more, perhaps just wanting more time with this fabulous couple. It isn’t every book where I want to keep reading and reading and not put the book down at all, but that was definitely the case here. 'The Chocolate Touch' is highly recommended for lovers of quiet, but beautiful, romances.

The Cover:
It's kind of terrible, in that it doesn't really represent the book or the characters that well, minus the fact that it is a romance set in Paris.