The Bitter Kingdom by Rae Carson 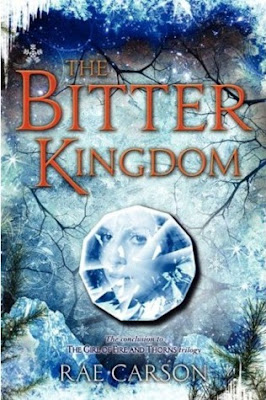 
Synopsis: (from Goodreads)
The epic and deeply satisfying conclusion to Rae Carson's Fire and Thorns trilogy. The seventeen-year-old sorcerer-queen will travel into the unknown realm of the enemy to win back her true love, save her country, and uncover the final secrets of her destiny.

"Carson joins the ranks of writers like Kristin Cashore, Megan Whalen Turner, and Tamora Pierce as one of YA's best writers of high fantasy."-Locus magazine

Elisa is a fugitive in her own country. Her enemies have stolen the man she loves in order to lure her to the gate of darkness. As she and her daring companions take one last quest into unknown enemy territory to save Hector, Elisa will face hardships she's never imagined. And she will discover secrets about herself and her world that could change the course of history. She must rise up as champion-a champion to those who have hated her most. Riveting, surprising, and achingly romantic, Rae Carson has spun a bold and powerful conclusion to her extraordinary trilogy.

My Thoughts:
I’m going to try and review this one with minimal spoilers, though some aspects can’t be avoided since this is the third and final book in the Fire & Thorns trilogy. If you’ve read the past two books you’re probably already dying to read this one. If you haven’t read this series I’m going to try and convince you! This has become of my favourite fantasy series, and I really think all fans of YA should read it.

Elisa is such a kick butt character -- she is so strong. She’s not a fabulous fighter, though she can definitely hold her own. I like that she has weaknesses that are shown to us, because it makes her seem more real. Elisa has definitely grown into her own throughout the series and has become a woman of strength, determination, and character. She’s a fair ruler who sometimes has to make tough decisions, but who always wants the best for her kingdom.

There's really not enough good stuff to say about Hector. He's strong, loyal, and loving. He's strong enough to be loved by someone of a higher standing, which might bother a man who is less secure. Without getting too specific, the romantic relationship here is so loving, honest, and full of respect and friendship. These are two people who care for each other tremendously, but who also have other duties and concerns.

What is so great about this book (and, indeed, each book of the series) is that there are so many different plots and journeys in it. I could see other authors taking the first quarter of this book and stretching it into a full length novel, but Rae never drags things out. There’s a nicely detailed plot with twists and turns, and it’s incredibly action packed. Rae Carson provided exactly what I wanted for this book, and also gave me things I didn't even know I wanted. Problems were solved, and there was examination of the prophecy and scriptures that were discussed throughout. There’s a fabulous romantic conclusion, political decisions are made, and we get to learn about Elisa's service.

What really brings this book, and the series, to life are a great cast of characters. I love how the secondary characters are so vivid that you could easily see them starring in their own books. I love the relationships they have with each other, and especially how they all relate to, and interact with, Elisa. Storm and Elisa in particular have a special bond. I loved reading about the type of connection and understanding that they have.

This was a perfect conclusion to the trilogy. I had seriously high expectations for ‘The Bitter Kingdom’ and it lived up to each one. Writing this review has me so excited to re-read this whole trilogy from start to finish. I’m jealous of those of you who have yet to read these books, because you have a fabulous treat in store for you. I really can’t praise this trilogy enough!

The Cover:
They're honestly not my favourite covers, but I don't dislike them either.