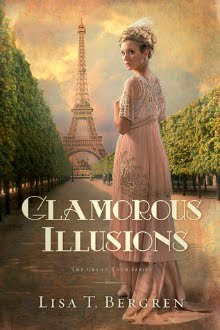 Synopsis:
It was the summer of 1913, and Cora Kensington's life on the family farm has taken a dark turn. Not only are the crops failing, so is her father's health. Cora is carrying on, helping her mother run their Montana farm until a stranger comes to call, and everything changes. Cora then learns a secret that will radically change her future: she is the illegitimate daughter of a copper king who has come to claim her.

Cora is invited to take the "Grand Tour" of Europe, a journey intended to finish a person's education, to solidify an understanding of ancient culture and contemporary refinement. As she travels from England to France with half-siblings she's never known, Cora encounters the blessings of the Kensington family name, as well as the curses. But when an unbidden love begins to form, she realizes the journey is only beginning.

Faced with the challenge of accepting her father, new family, and the identity that comes with it, Cora also struggles to accept that she is also the daughter of the one true King-a Father who is the only One who can truly heal.

My Thoughts:
'Glamorous Illusions' confirmed for me that Lisa T. Bergren knows how to write great characters that you root for. This book allows a glimpse into the life of Cora, who is put into a difficult situation and is then whisked away to foreign countries with people who don't necessarily accept her. It's interesting to see Cora's strength come out as her beliefs and values are questioned and while she deals with her new situation.

The book also offers the POV of Will, one of the tour guides, who is forbidden from having feelings for any of his charges. This isn't enough to stop the connection that he feels with Cora, however. Will is an interesting character who is also grappling with who he is. He's questioning his lot in life and figuring out who he wants to become. Will must reconcile what he wants to do versus what his responsibilities are.

'Glamorous Illusions' is a little bit slow at times, which made it hard to get into at first. I liked the characters and I was interested in general, but I would have liked more action and description about the activities and sites in Europe to balance out the internal philosophizing. Thankfully, though, by about half way I became more invested in the story and the action towards the end really drew me in.

This is an enjoyable book with likeable and sympathetic characters, and I'm very curious to see where the relationships go as Cora's grand tour continues in the next book.

The Cover:
Not to be punny, but I do love how glamorous it looks.

You can check out links and excerpts from reviews as well as details about the book on the Glamorous Illusions Blog Tour page.

Here's some more about the event: "Lisa will be hosting an evening of meaningful chat, fun trivia, laughter, and encouragement - bring your friends! She'll also be giving away some GREAT prizes: gift certificates, books, and a Book Club Prize Pack! (Ten copies of the book for your small group or book club and a live chat with Lisa via video or phone.)"