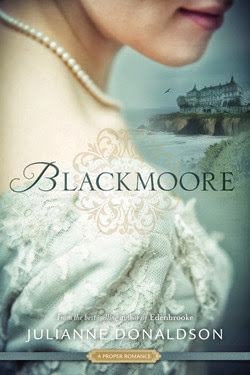 
Synopsis: (from Goodreads)
Kate Worthington knows her heart and she knows she will never marry. Her plan is to travel to India instead—if only to find peace for her restless spirit and to escape the family she abhors. But Kate’s meddlesome mother has other plans. She makes a bargain with Kate: India, yes, but only after Kate has secured—and rejected—three marriage proposals.

Kate journeys to the stately manor of Blackmoore determined to fulfill her end of the bargain and enlists the help of her dearest childhood friend, Henry Delafield. But when it comes to matters of love, bargains are meaningless and plans are changeable. There on the wild lands of Blackmoore, Kate must face the truth that has kept her heart captive. Will the proposal she is determined to reject actually be the one thing that will set her heart free?

Set in Northern England in 1820, Blackmoore is a Regency romance that tells the story of a young woman struggling to learn how to follow her heart. It is Wuthering Heights meets Little Women with a delicious must-read twist.

My Thoughts:
I absolutely adored Julianne Donaldson's first novel, ‘Edenbrooke’, so I was very excited to delve into ‘Blackmoore’, another historical romance. Both of Julianne’s books straddle the line between Young Adult and Adult. YA isn’t as clear of a category in historical novels, but I definitely feel this would work for both audiences, since it is a clean romance.

Julianne Donaldson definitely knows how to bring on the swoon while keeping things PG. There’s such a yearning to this novel, with Kate pining after her best friend, who is meant to marry someone else. She hides her feelings by talk of adventure, and has made it very clear to everyone that she never wants to marry. Of course, as the reader we get a definite sense that Henry loves Kate as well, but he simply can’t admit it because of his position, or he doesn’t want to because of how clear Kate is on never marrying.

What this author does so well is bringing out such emotion in her characters, and therefore in her readers. You can just feel the chemistry between Kate and Henry, both in the present and in flashbacks from their friendship. You can also feel the pain in Kate having to deal with her flirty, busybody mother and Henry’s snobby, plotting mother. Then there’s Henry’s intended, the insufferable Juliet, and Sylvia, Henry’s sister, who used to be friends with Kate, but is now a stranger.

I flew through this book, because it was just so easy to feel a kinship with Kate and to fall in love with Henry alongside her. I love when you want to reach right in and shake the characters, to force them to work things out, and that definitely happened here. I was so invested in the characters and their happiness. ‘Blackmoore’ is a clean romance that manages to be superbly swoony, and it’s a great introduction to historical romance.

You can find many more reviews for 'Blackmoore' (as well as a few giveaways and guest posts) by visiting Shadow Mountain's blog tour page.