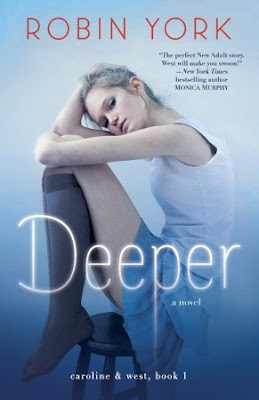 In this New Adult debut by Robin York, a college student is attacked online and must restore her name—and stay clear of a guy who’s wrong for her, but feels so right.

When Caroline Piasecki’s ex-boyfriend posts their sex pictures on the Internet, it destroys her reputation as a nice college girl. Suddenly her once-promising future doesn’t look so bright. Caroline tries to make the pictures disappear, hoping time will bury her shame. Then a guy she barely knows rises to her defense and punches her ex to the ground.

West Leavitt is the last person Caroline needs in her life. Everyone knows he’s shady. Still, Caroline is drawn to his confidence and swagger—even after promising her dad she’ll keep her distance. On late, sleepless nights, Caroline starts wandering into the bakery where West works.

They hang out, they talk, they listen. Though Caroline and West tell each other they’re “just friends,” their feelings intensify until it becomes impossible to pretend. The more complicated her relationship with West gets, the harder Caroline has to struggle to discover what she wants for herself—and the easier it becomes to find the courage she needs to fight back against the people who would judge her.

When all seems lost, sometimes the only place to go is deeper.

Caroline is a character who grows so much throughout the book. She chooses to become strong after what happened. She’s deeply, psychologically troubled by what has happened, but with West to support her she learns how to find inner strength. Caroline learns to stand up for herself, owning the fact that she did nothing wrong, that she has nothing to apologize for or feel ashamed of.

West is absolutely a complex character. He's not a leading man I would usually find appealing, but he totally breaks the mold. He’s an incredibly hard worker, he's smart, and he cares so much about his little sister. But then there’s the fact that he deals drugs for the money, and his past is messy. West is not someone to pin your hope and dreams on, and yet you can see that his feelings for Caroline are true and deep. Caroline and West are actually quite awesome together. Their relationship takes a slow progression from lust to friendship and then something more.

So many New Adult books feature that misunderstood bad boy character and a female lead who is dealing with a crisis. The two characters somehow find each other and make everything okay just by that fact alone. I'm so glad that my suspicions were right and that Deeper is nothing like that. Robin York writes adult romance as Ruthie Knox, and if there's one thing I adore about Ruthie's books is that she writes in-depth characters who have flaws, who don’t fit stereotypes, but who you fall for and cheer for. That’s definitely the case here as well, in her first book as Robin.

Deeper definitely has a killer ending. It’s one which leaves you feeling for both characters, wanting a Happily Ever After for them, and yet understanding why things have turned out the way they have. However this is just Part 1 of Caroline and West’s story, so there’s definitely a kernel of hope there.

If you’re looking for a quality New Adult book with high emotions and many themes that you might expect to find in NA, then look no further. Deeper features all the popular things about NA, but with some real heart to the story and characters that make the situations feel real and meaningful instead of cliche. I highly recommend you check this one out.