More Than Music by Elizabeth Briggs 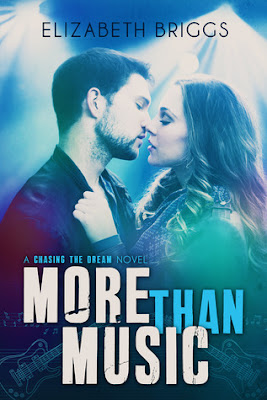 Music major Maddie Taylor seems to have her life all figured out. She’s just finished her junior year of college, has a summer internship lined up with the LA Philharmonic, and plans to go to grad school to write movie scores. Only her roommates know she practices guitar every night and secretly dreams of a louder life. But geeky girls like her don't get to be rock stars.

Tattooed singer Jared Cross has a new girl every week, but when he catches Maddie playing one of his songs, she attracts his attention in an unexpected way. His band needs a fourth member for The Sound, a reality TV show competition—and he wants her. Though Maddie refuses to be another notch on Jared’s bedpost, she agrees to risk everything for the chance to be a rock star.

Once on the show, Maddie discovers there’s more to Jared behind his flirty smile, and with each performance their attraction becomes impossible to ignore. When the show pressures Jared to flaunt his player image, they’re forced to keep their relationship secret, but Maddie can’t help but want something real.

As the competition heats up, Jared will do whatever it takes for his band to win, and Maddie must decide if following her dream is worth losing her heart.

My Thoughts:
I absolutely loved this book. It contains so much fun, so much swoon, and so much character development. Our main character Maddie is a classically trained pianist. She’s a self-proclaimed nerd who doesn’t see herself as anything special, except that she has a secret talent for playing guitar. Maddie’s love interest is Jared, a tattooed “bad boy” and the lead singer of a band. You might think based on these characters that you’ve read this story before, but you definitely haven’t. Sure, More Than Music fits in with New Adult tropes to an extent, but only in a good way. It offers up exactly what you want from NA in the form of a professionally edited book. Elizabeth Briggs is a very talented author who belongs in bookstores alongside other New Adult rock stars like Tammara Webber and Colleen Hoover.

I found Maddie to be a sympathetic character. She’s sweet and smart, and she has a crush on a guy who she sees as unattainable. Jared definitely comes across as a ladies man at first, but very quickly the reader sees that he’s a lot deeper than that. He’s very much into music in the same way Maddie is, and their connection in this way is instantaneous. In regards to the romance I love sexy scenes in NA when they seem “right”, but so often I find them to be extraneous, just there because it’s expected of the genre. I’d rather read a relatively clean story that’s swoony and slow burn than read a book with tons of sex scenes that feel out of place. I’m happy to say that I found More Than Music to have the perfect balance. The sexy parts were totally fitting to the characters and the story, and it’s a slow burn to get to that point, with Maddie crushing on Jared from the beginning.

The concept of this book (a battle of the bands reality TV competition) is just amazing. I’m not a person who listens to a lot of music and I’ve never seen an episode of “The Voice”, but weirdly enough, give me a book on these topics and I am in love. Elizabeth Briggs executes this concept flawlessly. I loved all the aspects of it: the scenes with the judging panel, the choosing of songs, the rehearsing, the new fans. There were also the internet reactions (both very good and very bad), the producers, the “mean girl” -- all of these elements were so fun and interesting. There was also a fun geekiness to the novel: just enough to keep it true to character, but not too much that it seemed like name dropping. I like that it was a part of the characters, from Jared’s comic book t-shirts to the band name (Villain Complex) and mentions of Hector's graphic novel.

I really loved the character journeys in More Than Music. Both Maddie and Jared really transform throughout the novel. Maddie goes from a scared little girl to a rock goddess. She learns to stand up for herself, to go for what and who she wants. I loved this message of finding your self-worth and not compromising when it really matters. Jared, too, learns about himself. He’s always been so focused on music that he doesn’t necessarily clue in to situations where he should be prioritizing people over his career. He learns that life is about people, relationships, and love, and that music isn’t absolutely everything in life.

Basically: More Than Music is so fun, so swoony, and so smart. It’s my favourite New Adult read from the past while, and I highly recommend it to all NA fans.

Find teasers, playlists, and more on Elizabeth's website. You can also read the first chapter!