Loving You is Easy by Wendy S. Marcus 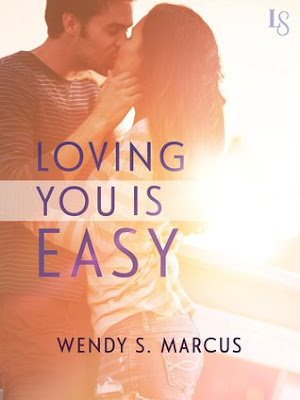 She’s a survivor of the front lines of politics. He’s a wounded soldier returning home from the battlefield. Can they place their trust in the power of love?

Nobody plays the role of perfect politician’s daughter better than quiet, respectable math teacher Brooke Ellstein. But she won’t be caught swimming with the sharks again, not after the son of a wealthy donor sinks his teeth into her and gets away with it. Still, political connections have their perks, such as heading up the governor’s “Support Our Troops” pen-pal initiative—and getting first dibs on the smoking-hot sergeant whose picture shakes her right down to her goody-two-shoes.

When corresponding with sweet, classy Brooke, Shane Develen instinctively hides his commando tattoos and blue-collar roots—and he can tell that she’s hiding something, too. But Shane knows he’s gained her trust when Brooke gives him a blisteringly sexy photo. Then he’s injured in an ambush and a fellow soldier posts the snapshot online. Overnight, Brooke’s reputation turns to ashes. Even though he’s totally wrong for her, Shane shows up on Brooke’s doorstep, determined to set things right—and discovers that right or wrong has nothing on the chemistry they share.

My Thoughts:
Loving You is Easy is one of those books that contains a lot of tropes. The ones I found include: the girl with a mysterious damaged past, the girl with family issues (bonus points: her father is in politics), the injured young vet fresh back from war, and the sex scandal. Now, if I see a book that is too much like every other book out there I get a bit cautious. There's a reason why tropes are tropes, though, and that’s because when they’re done well? They’re irresistible. In this case I loved the characters in Loving You is Easy and I adored the way the story played out. It was deeply emotional -- as in, I had actual tears streaming down my face several times. I could really feel for the characters and their circumstances.

Our main character Brooke is tough. She’s very determined and self-aware. Brooke falls in love with Shane and is willing to wait for him to be ready for the relationship. When Shane comes back from war injured she’s not scared of the situation and is willing to love and support him no matter what. As I mentioned, Brooke has had a hard time with her family, but she’s very strong and brave, distancing herself from a poisonous situation.

Shane first appears to be the typical good time guy, a guy’s guy, but since this is a romance novel, he’s definitely using bravado to cover up the major feels he’s feeling. He doesn’t think he’s good enough for Brooke, and it’s even worse when he comes back injured and his ego is bruised along with his body. On top of that he has PTSD and thinks of himself only as weak. Shane is actually dealing pretty well, considering he has no idea where his life is going now that his chosen career is over, and on top of that he’s dealing with the death of his best friend. He’s pretty strong, considering all of that, but Shane only sees the negative: the weakness of his leg and his vision, the nightmares he has, etc.

I really liked that Shane and Brooke had a background of writing letters and emails to each other for years. This gave them a real chemistry straight away that made sense. They knew each other’s deepest secrets, so it was logical that they worked so well together in person. I got a little angry at Shane constantly thinking he wasn’t good enough, but I liked that even when he was trying to push Brooke away he didn’t go into unforgivable territory. So often “heroes” do and say horrible things in the name of “saving” the woman they love, so I’m glad it didn’t go to that level.

Besides the romance, there’s also a whole side plot about sexy pics being leaked online, which actually turned out to be less of the story than I expected. It’s this huge mess of false accusations of Brooke, who is a middle school teacher, sexually abusing her students. I wasn’t sure how I liked the message overall, about the dangers of false reporting and why it’s so dangerous to use just witness testimony, and also how you automatically assume the guilt of the adult in these situations. It worked in the case of the book, but it seemed a dangerous topic to explore, considering how many actual abusers get off scott-free in situations like this. I was afraid this story line would go to the side when the romantic conflict came to the forefront, but I thought the way it was wrapped up was satisfactory, if a bit convenient.

I loved this story for the most part, and found both the main and secondary characters to be interesting. Brooke’s BFF is kind of insane, but I love their relationship. I’m sure we’re getting a book with her and Shane’s army buddy, considering they were pen pals as well, and had some crazy incident between them. I also thought Shane’s family was a hoot, with his mother being lovely and his one sister being absolutely crazzzy. Overall, recommended.