Four Nights With the Duke by Eloisa James (Review + Giveaway) 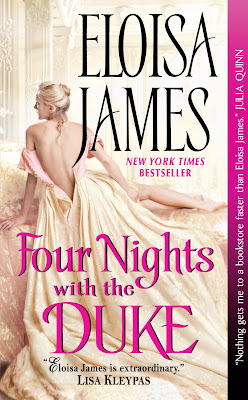 As a young girl, Emilia Gwendolyn Carrington told the annoying future Duke of Pindar that she would marry any man in the world before him—so years later she is horrified to realize that she has nowhere else to turn.

Evander Septimus Brody has his own reasons for agreeing to Mia's audacious proposal, but there's one thing he won't give his inconvenient wife: himself.

Instead, he offers Mia a devil's bargain...he will spend four nights a year with her. Four nights, and nothing more. And those only when she begs for them.

Which Mia will never do.

Now Vander faces the most crucial challenge of his life: he must seduce his own wife in order to win her heart—and no matter what it takes, this is the one battle he can't afford to lose.

My Thoughts:
Four Nights With the Duke is Vander’s story, who you got to know fairly well if you read Thorn and India’s story, Three Weeks With Lady X. Vander is the Duke, and we know he has a bit of scandal in his family -- from the prologue we know very well what it is, and we meet his heroine, Mia. This book contains a couple of tropes, first with the marriage of convenience, but also with blackmail. It makes for an interesting coupling, and the situation makes it so I didn’t blame Vander at all for his attitude at first.

From Mia’s POV we see someone who has been left alone, who’s been jilted, who needs a husband in order to take care of her nephew. It makes her a sympathetic character, but it doesn't fully excuse her actions. I liked when her plans backfired on her to an extent. I liked her, but considering she blackmailed a guy into marrying her, she deserved to get a little back at her.

Mia is also an interesting character because she’s a writer. We see Mia plotting her book and having issues with it, which is very relatable. It was like seeing into a writer’s brain when Mia wanted her publisher to send her other books to read so she could avoid her own work. The thinly veiled references to Julia Quinn's and Lisa Kleypas’ books were so fun to pick out.

In a romance you always want to root for the hero, but it’s also great when the hero isn’t perfect: when he’s making mistakes and doing dumb things. Romance may not always lend itself to total realism, but I always enjoy when the hero seems like he could be a regular person instead of the Best Man Ever. Well, Vander definitely fits into the imperfect hero role. The arrogant assumptions he had at first about how Mia felt made me literally LOL.

Despite how he acts at first, Vander is a very understanding character who quickly gets why Mia did what she did. I loved how he supported Mia’s nephew, Charlie, so well and showed him love right away in a different way than he was used to. Charlie was a great character, which is no surprise, because one thing Eloisa James always does well is secondary characters. I loved Vander’s uncle and how he was a total fanboy over Mia’s books. I also liked what we saw of Thorn and India, and how they were so loyal to Vander.

While I did like Three Weeks With Lady X better, I still thoroughly enjoyed this book. There’s always something so epic and compulsively readable about Eloisa’s books. If you’re just getting into historical romance and haven’t yet read her backlist I highly recommend you do so.

The Cover:
Kind of typical, but I like it. 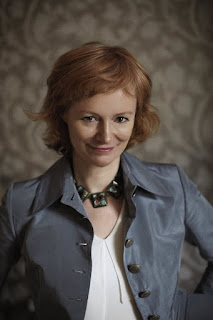 About Eloisa:
A New York Times bestselling author, Eloisa James is a professor of English literature who lives with her family in New York, but who can sometimes be found in Paris or Italy. (Her husband is an honest to goodness Italian knight!) Eloisa’s website offers short stories, extra chapters, and even a guide to shopping in Florence.


GIVEAWAY:
a Rafflecopter giveaway
Be sure to follow along with the rest of the tour on Tasty Book Tours.