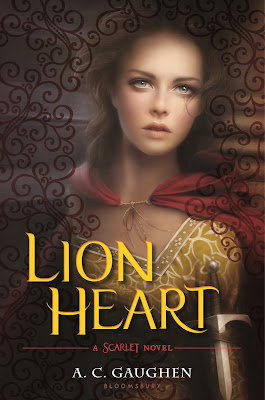 Scarlet has captured the hearts of readers as well as the heart of Robin Hood, and after ceaseless obstacles and countless threats, readers will finally find out the fate of the Lady Thief.

Imprisoned by Prince John for months, Scarlet finds herself a long way from Nottinghamshire. After a daring escape from the Prince's clutches, she learns that King Richard’s life is in jeopardy, and Eleanor of Aquitaine demands a service Scarlet can’t refuse: spy for her and help bring Richard home safe. But fate—and her heart—won’t allow her to stay away from Nottinghamshire for long, and together, Scarlet and Rob must stop Prince John from going through with his dark plans for England. They can not rest until he’s stopped, but will their love be enough to save them once and for all?

How I Spent My Summer Vacation by A.C. Gaughen

Let’s break it down!

Writing
FIRST, the week of June 8th, I’ll be heading down to New York to start the Boldly Bookish tour! I’m rocking out with Tiffany Schmidt, Trish Doller and Emery Lord, and I’m basically expecting it to be a five-city sleep over. That’s what grown ups do, right?

After that, I’ll have time off this summer--I’ve been working as a teaching fellow for the past year, so that means I get to write—all the time! Which is pretty fantastic, because as soon as I get home from tour, I’m diving into revisions for TERRA, the first book in my new Elementae series that my editor at Bloomsbury just acquired. The first book will be out in 2017, so I need to get cracking!

Life Stuff
I’m hearing wedding bells in surround sound this year. Launch week is also the week of my third of seven weddings this year, but it is by far the most special—my older brother is getting married! So right after launch I’m resting my toes to get ready to dance the whole weekend away. Then I have another wedding in July, and it’s formal so I get to wear a long, pretty dress! Then I can relax until the next wedding in September. Plus Fourth of July and fun stuff in the sun (ok, under a hat and an umbrella and counting the minutes until I’m in the water or air conditioning).

But yes, in general, my summers consist of hiding from the sun, looking like a lobster no matter what I do, and hanging out on a boat (when I’m not jumping off the boat with my rascally, water-lovin’ goldendoodle Lucy!).

Thanks for sharing, Annie! I wish the Boldly Bookish tour was coming near me, because it sounds like it will be awesome. Speaking of awesome, Terra sounds absolutely epic. Everyone, you can add it to Goodreads here. 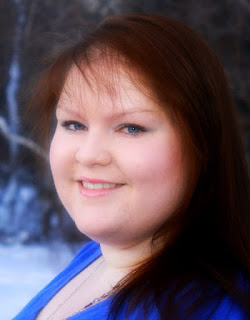 I am shamelessly addicted to staying up far too late (it feels like stealing time), diet coke (it burns so good), Scotland (stupid country stole my heart and won't give it back. Interpol has been ineffective for prosecution) and thieves (so I guess I'm not that mad at Scotland). 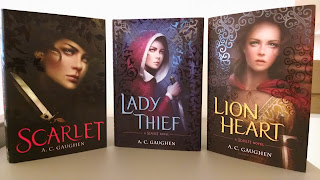 Prizes = 3 complete sets of the SCARLET series. US Only. Copies will be sent out from the publisher at the end of the tour.
a Rafflecopter giveaway