Dark Inside by Jeyn Roberts 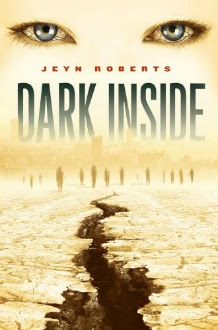 Synopsis: (from Goodreads)
Since mankind began, civilizations have always fallen: the Romans, the Greeks, the Aztecs…Now it’s our turn. Huge earthquakes rock the world. Cities are destroyed. But something even more awful is happening. An ancient evil has been unleashed, turning everday people into hunters, killers, crazies.

Mason's mother is dying after a terrible car accident. As he endures a last vigil at her hospital bed, his school is bombed and razed to the ground, and everyone he knows is killed. Aries survives an earthquake aftershock on a bus, and thinks the worst is over when a mysterious stranger pulls her out of the wreckage, but she’s about to discover a world changed forever. Clementine, the only survivor of an emergency town hall meeting that descends into murderous chaos, is on the run from savage strangers who used to be her friends and neighbors. And Michael witnesses a brutal road rage incident that is made much worse by the arrival of the police--who gun down the guilty party and then turn on the bystanding crowd.

Where do you go for justice when even the lawmakers have turned bad? These four teens are on the same road in a world gone mad. Struggling to survive, clinging on to love and meaning wherever it can be found, this is a journey into the heart of darkness – but also a journey to find each other and a place of safety.

My Thoughts:
If you’re looking for a happy read, I suggest you look elsewhere. But if you’re looking for a gritty, intriguing book which examines the intricacies of good versus evil, then look no further. ‘Dark Inside’ questions what lies at the heart of humanity and the potential for evil in society. When disasters occur around the world and ordinary people go crazy, killing everyone around them, how can you survive? What do you do? Where do you go? These are the questions that four teens (Mason, Aries, Clementine, and Michael) ask themselves.

This book is told from the perspectives of these four main characters, which may bother some people who like a clean, straight forward narrative. Occasionally it takes a while to get back to a specific character and their story, but thankfully the book is written in third person so you don’t have to work to distinguish between voices. There were very few instances where I couldn’t remember where a character had left off and had to think about it for a second, so I think the perspectives were well done. There’s also a mystery perspective called ‘Nothing’ whose words are both terrifying and intriguing. You never really know who exactly is saying these words, making them all the more chilling.

All four main characters in this book have suffered tremendous loss: they’re floundering as they try and survive. Occasionally there are questions if they even want to keep going. It’s hard to say why I enjoyed this book so much, because I don’t usually like darker stories with so much suffering. Parts of this book were absolutely heartbreaking and hard to read about, I admit, but there was also the want for survival and hope. The bravery that some of the characters show is amazing, and yet there are also portrayals of cowardice. There is heroism alongside characters who feel sorry for themselves, making the situations seem all the more realistic. It was easy to put myself in the position of the characters, and I can honestly say I don’t know what I would do in those situations.

This is very clearly the first book in a series: it’s a journeying book with the four characters starting out separate and ending up together. You can tell as the book goes on that this is what will occur, but as you keep flipping the pages you will wonder how and when. Some people might feel frustrated that there is no real resolution to the larger plotline, but if you enjoy a good “road” or “journey” book then this one might appeal to you. Once I started reading ‘Dark Inside’ I didn’t want to put it down. This book and its characters will draw you in. It’s horrifying, it’s enthralling, and it’s a fabulous ride.

The Cover:
Deliciously creepy & atmospheric; I love the UK cover as well.