I'm happy to welcome author Ann Herrick to Book Labyrinth today. Ann's latest book is entitled "Snowed In Together". Here is some more information about it:

What secrets are revealed when six teens get trapped at school on a Saturday?

Wes and his best buds, Tony and Jeff, have enough brain power to fuel the entire sophomore class, but when it comes to their social lives, they are totally inept. So they volunteer to organize the art room on Saturday knowing three certain cheerleaders will be there for practice. Trouble is, none of the guys can come up with a plan to take advantage of the opportunity to be the only six students in the building.

I asked Ann a few questions which she was kind enough to answer...

If you had to describe the premise of Snowed In Together in a tweet (140 characters or less), what would you say?

Six teens from totally different circles who are snowed in at school for the weekend reveal secrets and form unexpected attachments.

What made you want to set a story during a snowstorm? What exactly about this closed-off setting is so appealing to writers and readers?

I gave a talk at a school and some of the guys actually suggested the idea of a story of kids snowed in at school. Closed-off settings give characters a chance (or force them) to behave differently than they would in their usual environment.

Ooh yes, I love that idea that they might act differently.

Who was your favourite character to write in Snowed In Together? Which 3 words would you use to describe them?

Wes, the main character, is my favorite. Introvert, evasive, horny-intelligensia.

I saw on your website that you also write copy for greeting cards, which sounds very interesting. How do you go about getting a job like that?

I do it as freelance work. I found the names and needs of some greeting card companies in Writer's Market and started submitting ideas. I've lost track now, but I've sold over 200 ideas. The pay can be anywhere from $10 per idea to over $150! I write mostly humorous card ideas.

Outside Beauty by Cynthia Kodohata; Along for the Ride, by Sarah Dessen; Mates, Dates and Diamond Destiny by Cathy Hopkins

Nice, I am a huge Sarah Dessen fangirl!

Finally, besides reading and writing, what are some things or hobbies that you enjoy?

I wish I could say hang gliding or something equally exciting, but in addition to reading and writing I really enjoy weightlifting (small weights!), walking--but not in the rain, listening to music, cheering for the Oregon Ducks, working in the yard and pampering my cat. 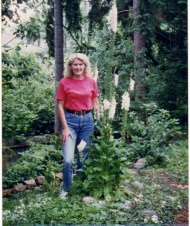 Ann Herrick grew up in Connecticut, where she graduated from The Morgan School and Quinnipiac University. She now lives in Oregon with her husband, who was her high-school sweetheart. Their wonderful daughter is grown, married and gainfully employed, and has given Ann her only grand-dog, Puff, a bloodhound-rottweiller-beagle mix. While she misses the East Coast, especially houses built before 1900, she enjoys the green valleys, fresh air and low humidity in the Willamette Valley of Oregon. In addition to stories and books for children and young adults, Ann also writes copy for humorous and conventional greeting cards. Her books have won awards such as International Reading Association/Children's Book Council "Children's Choice" and the American Library Association "Recommended Book for Reluctant Readers."

Thanks so much for stopping by, Ann! 'Snowed In Together' sounds like the perfect read for when the weather gets cooler.