Please welcome author S.B. Sebrick to Book Labyrinth today. He graciously provided me with an interview to post, and is also giving away 5 (!) copies of both Decoy & Deluge.

Interview:
Which authors have influenced you most?
I’d have to say J.R.R. Tolkien, Robert Jordan and Brandon Sanderson have really impacted my writing style when it comes to how I write Epic Fantasy. I’ve learned alot about deeply immersing yourself and the writer into another world.

What inspired you to become a writer?
I’d say it’s a natural evolution from playing legos for hours on end when I was ten. Making up terrific stories and exotic worlds is alot of fun My Aunt DiAnne and my writer’s group mentor Dr. Carey had a strong impact on my work as well though. They encouraged me to keep pushing at it, no matter what.

Tell us your most rewarding experience since being published.
I wrote the memoirs for four winners of the Women of Achievement program during my first two years of college. At the time it was a great chance to make money off my writing but I never expected to be granted applause at the award’s ceremony at the Hilton. Writing has opened doors for me I never could have dreamed of touching on my own. It’s always fueled my desire to keep honing my skills.

What was your favourite book when you were a child/teen?
The Walking Drum. Kerbouchard is so good at getting into and out of trouble with his witty humor and sheer luck it makes for a terrific read.

What’s one piece of advice you would give to aspiring authors?
Keep at it. The more stories you write, the more cash streams you’ll have available when you get something published and people start paying attention to you.

Can you see yourself in any of your characters?
Kaltor, the main character in Decoy, has a lot of attributes I aspire to. If I wrote the way he trained, this series would be almost done by now.

How do you react to a bad review?
It’s a challenge to write a better story.

If you were a superhero what would your name be?
Super Seth. Seriously, that’s the one I chose for myself when I was five, I even wrote a theme song then inspired by Captain Planet about “Putting the bad guys down to zero”.

If you could have any superpower what would you choose?
I’d have to go with wolverine’s health regeneration and adamantium claws, but I did just write a novel about a kick butt assassin so I’m sure that’s influencing my decision making process just a bit.

What is your favourite flavour of ice cream?
Anything besides vanilla. What’s the fun of dessert if you only go with one basic flavor?

One food you would never eat?
I will never eat a cockroach EVER again!

That mention of "ever again" makes me curious!!

Pet Peeves?
My alarm clock’s high pitched shriek. The ironic thing is I can’t get rid of it since it works so well at waking me up! The downside is occasionally I hear it on the radio and twitch uncontrollably. Not a good habit to demonstrate on a first date…

What’s the best advice anyone has ever given you?
Just do your best and forget everything else.

Nickname?
‘Buddy’ if you’re family, or Sethie if you’re under the age of 5. 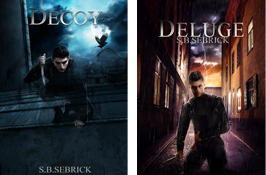 The last few grueling years of training have served Kaltor well. He’s learned to harness the magic within his body, overcome a stronger opponent, avoid capture, and everything else an assassin-in-training needs to survive.

Or so he thought.

But when those they protect at an excavation site release a demon from the Abyss itself, Kaltor realizes just how poorly prepared they all are for what’s coming. Within a single night, their mining camp of one thousand people plummets to a couple hundred terrified survivors, the majority turned against each other by the demon’s potent abilities. Then he turns towards Shaylis, the largest city in the region, for the next stage of his plan.

In a constant battle of both steel and strategy Kaltor and his friends struggle to delay, deceive and defeat their opponent, who’s spent the last thousand years planning out every detail of her assault to perfection. As the number of casualties mounts and her final plan comes to light, Kaltor is left with only one option. He must draw on the secret power within himself, knowing if his true identity is discovered, his life and the fate of the world, will be changed forever.

Find Decoy and Deluge on Goodreads.

Giveaway:
Details:
- 5 winners will win eBook copies of "Decoy" & "Deluge" (PDF, Kindle, Epub, & Doc/docx available)
- Open Internationally
- Ends February 13 at midnight EST
- Winners will be chosen using random.org; their email addresses will be forwarded to Seth who will then supply them with the download


To enter to win, please leave a comment and fill out this form.