The Rivals by Daisy Whitney 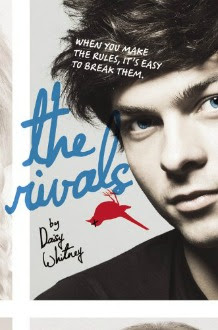 Synopsis: (from Amazon)
When Alex Patrick was assaulted by another student last year, her elite boarding school wouldn't do anything about it. This year Alex is head of the Mockingbirds, a secret society of students who police and protect the student body. While she desperately wants to live up to the legacy that's been given to her, she's now dealing with a case unlike any the Mockingbirds have seen before.

It isn't rape. It isn't bullying. It isn't hate speech. A far-reaching prescription drug ring has sprung up, and students are using the drugs to cheat. But how do you try a case with no obvious victim? Especially when the facts don't add up, and each new clue drives a wedge between Alex and the people she loves most: her friends, her boyfriend, and her fellow Mockingbirds.

As Alex unravels the layers of deceit within the school, the administration, and even the student body the Mockingbirds protect, her struggle to navigate the murky waters of vigilante justice may reveal more about herself than she ever expected.

My Thoughts:
I really loved The Mockingbirds, so I was psyched to read this 2nd book by Daisy Whitney. I really liked how in this volume there were concrete examples about the administration ignoring things going on under their noses in order to prevent the school from looking bad. It's so sad to see how the administration cared more about the school’s reputation than the students' well-being, but it makes it plausible that a group like the Mockingbirds exists.

The Rivals presents an interesting case for the Mockingbirds because it’s not something that’s easy to pinpoint on who is being harmed; it’s far different from Alex’s case in the first book where someone has been wronged and there is a clear perpetrator. I also liked how Alex began to question the Mockingbirds and their role. The existence of such a group is very controversial, and I liked seeing Alex wonder if the Mockingbirds had any impact and whether vigilante justice really was the best option.

Daisy Whitney does characters fabulously well and I loved the return of favourites like Martin and Jones, but I also enjoyed meeting some new ones. Alex is such a cool and strong character. I really love how she makes decisions and sticks to them, and that her decisions show her principles. It was so lovely to see Alex choose to be in control of herself and be in charge of her own life after having something horrible happen to her. If you like strong, smart, and brave main characters then you'll definitely like Alex. Overall this was a great 2nd book, and if you liked the first book then I think you’ll enjoy this one just as much.

The Cover:
So pretty; the re-design for these books is fabulous.