Time for another guest review from my awesome Mom (aka Wilma)! =) 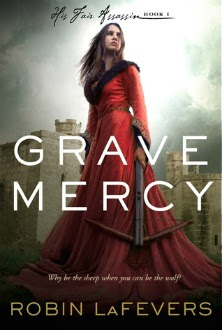 Synopsis: (from Goodreads)
Why be the sheep, when you can be the wolf?

Seventeen-year-old Ismae escapes from the brutality of an arranged marriage into the sanctuary of the convent of St. Mortain, where the sisters still serve the gods of old. Here she learns that the god of Death Himself has blessed her with dangerous gifts—and a violent destiny. If she chooses to stay at the convent, she will be trained as an assassin and serve as a handmaiden to Death. To claim her new life, she must destroy the lives of others.

Ismae's most important assignment takes her straight into the high court of Brittany—where she finds herself woefully under prepared—not only for the deadly games of intrigue and treason, but for the impossible choices she must make. For how can she deliver Death’s vengeance upon a target who, against her will, has stolen her heart?

Wilma's Thoughts:
I thoroughly enjoyed this book. It was outstanding. There are so many elements to capture the attention… A no nonsense, "kick-ass" female assassin gifted by the God of Death; a potential love interest; politics in the royal court; mistrust; revenge; and much, much more. Add to this a fantastic story of personal growth in the heroine, Ismae, and my attention was grabbed from the very beginning.

You watch Ismae evolve from a naïve, abused young woman into someone who is smart, quick thinking and does not take any malarkey from anyone. She made the story for me. Her charm is intriguing, she is unintentionally witty and let’s face it, anyone who hides weapons under her skirts and kills people with jewelry captures my attention. Her bracelets contain thin wire so she can GAROTTE anyone who is evil, she has a headband full of poisonous pearls AND a knife that fits into her corset! How’s that for being prepared. Some female super heroes would be jealous of Ismae’s gadgets.

I really enjoy historical fiction if it's done right. I like some detail but not pages and pages of it and this book satisfied me with enough detail but not too much to make it mundane. It has enough touches of fantasy to add a great flair to the story.

At first, the sheer length of the book was daunting and I hesitated to read it. I also had not read very many YA historical fiction novels and was not sure I would enjoy it. The book, however, even though labeled as YA is written in a very mature manner. I was very pleasantly surprised at how much I enjoyed this. The story kept me captivated and the outcome was not predictable. I became emotionally invested in the characters and what happened to them, which is rare. I am very excited to see what the next book holds.

I wholeheartedly recommend this book to anyone who enjoys a great tale of intrigue, mystery, romance and a touch of history. I am sure you will not be disappointed by it.

My Thoughts:
Basically reading my Mom's review has made me excited to re-read this book at some point, so I think she's done a good job with it. It perfectly describes how awesome this book is. My response on Goodreads when I first finished the book was: "Seriously in love with this one! Great characters, lovely chemistry, cool historical setting, and crazy political intrigue and shenanigans. Definitely my kind of book." Those thoughts still stand. Awesome, awesome book.

The Cover:
Like it! It totally shows the awesome tough female angle of the book.