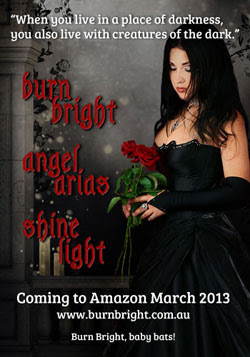 I first remember hearing of the 'Night Creatures' series when Nomes posted a review for Burn Bright back in 2011. This put the first book on my radar, but I haven't had a chance to read the series, mostly because Aussie books are notoriously hard to get a hold of here in North America.

Well, now there's good news! Burn Bright, Angel Arias, and Shine Light are being released internationally through self-publishing. This means a larger audience for the books (yay!), but also means that Marianne de Pierres and her team need help spreading the word.

The covers for the international editions were just recently released: 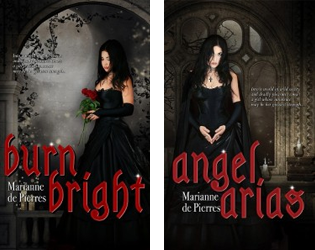 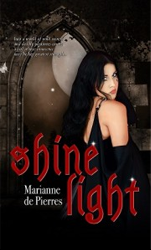 Here's what the first book, Burn Bright, is about:


Into a world of wild secrets and deadly pleasures comes a girl whose innocence may be her greatest strength.

In Ixion music and party are our only beliefs. Darkness is our comfort. We have few rules but they are absolute . . .

Retra doesn’t want to go to Ixion, the island of ever-night, ever-youth and never-sleep. Retra is a Seal – sealed minds, sealed community. She doesn’t crave parties and pleasure, experience and freedom.

But her brother Joel left for Ixion two years ago, and Retra is determined to find him. Braving the intense pain of her obedience strip to escape the only home she’s ever known, Retra stows away on the barge that will take her to her brother.

When she can’t find Joel, Retra finds herself drawn deeper into the intoxicating world of Ixion. Come to me, whispers a voice in her head. Who are the Ripers, the mysterious guardians of Ixion? What are the Night Creatures Retra can see in the shadows? And what happens to those who grow too old for Ixion?

Retra will find that Ixion has its pleasures, but its secrets are deadly. Will friendship, and the creation of an eternal bond with a Riper, be enough to save her from the darkness?

Listen well, baby bats. Burn bright, but do not stray from the paths. Remember, when you live in a place of darkness you also live with creatures of the dark.

If you're interested in being a part of the VIP Club to promote the books, be sure to check out the post HERE. 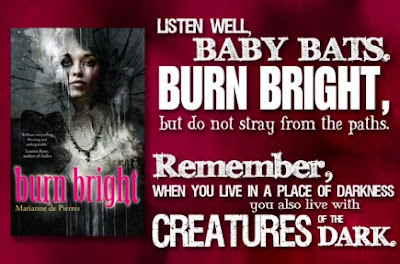