Today I'm happy to be part of the 'Aspen' cover reveal, a YA contemporary novel by Rebekah Crane.

Here's a little bit about the book:

One quiet night in Boulder, Colorado, Aspen Yellow-Sunrise Taylor made a mistake.

In the next instant, her life changed forever.

Aspen doesn't want to remember when Katelyn Ryan, a sleek-haired popular soccer player, crossed the yellow line in her car and smashed into Aspen's. But forgetting is pretty hard- because Katelyn may have died - but she didn't leave. Her ghost is following Aspen around, and heading into senior year, it's kind of a problem. Especially when Katelyn's gorgeous former boyfriend Ben appears to be the only person at school with a clue as to how Aspen feels.

Popularity, college, Homecoming Court, hot guys - none of these things ever mattered to Aspen. She's been busy trying to rein in her giant mass of blonde curls, keep her stoner mother Ninny away from Toaster, her mom's awful bongo drumming boyfriend, and prevent her best friends Kim and Cass from killing - or kissing - one another. But with Ben sitting next to her in Physics looking all too gorgeous, Katelyn's spirit dogging her steps, and her obsessive snow-globe collecting therapist begging her to remember all the things she wants to forget, Aspen is thrust into a vivid, challenging world she can't control … and doesn't want to.

A darkly funny, emotionally gripping story of opening up, letting go, and moving on, ASPEN is about the best-worst accident of your life ... and what comes next.

And here's the cover! 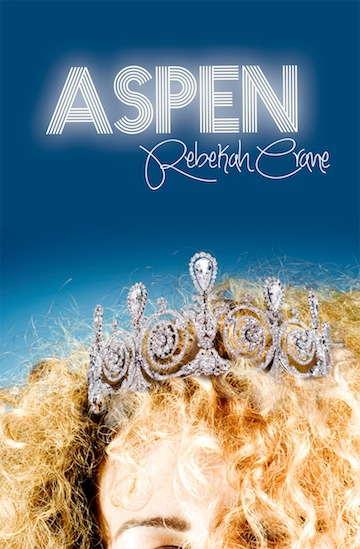 About the author:
Rebekah Crane fell in love with YA literature while studying Secondary English Education at Ohio University, but it wasn't until ten years and two daughters later that she started to write it. Inspired by her past students, growing up in Cleveland with its fabulous musical theater community, and music of all kinds (particularly the Avett Brothers), she created PLAYING NICE. It is her first published novel, but having an unbridled imagination, it's not the only fantasy world she's lived in (just ask her husband). ASPEN, her second YA creation, is set to release in January 2014. She now lives in Colorado, where the altitude only enhances the experience.

Plus we've got a great giveaway for you!