The 12 NAs of Christmas: Christmas Catch & Off The Market

A scheduling error means I missed the official blitz on Friday, but hey -- the info on the books is still good, and there's tons of time to enter the giveaway! 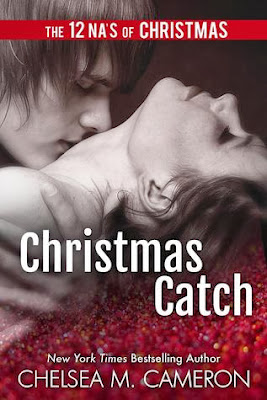 Two years ago, when Ivy Emerson bailed from the tiny fishing village she’d grown up in to go to Columbia, Sawyer McCallister was the only thing she was sad to leave behind, and she still didn’t look back. But when her mother guilts her into coming home for Christmas, she crashes headfirst into Sawyer, who’s also returned after being away.

Now that they’ve both been dragged back to Saltwater, Maine, they might just realize it’s where they belong. Together.

“Need some help?” This is not happening.

“Ivy?” His hair’s a little longer, and his face is a little leaner. He looks . . . older. But his eyes. They’re still the same.

“Sawyer,” I whisper, because I can’t believe it’s him. What the hell is he doing here?

A car drives behind Sawyer, honks, and he waves them on. The two of us are frozen, unable to move. At least I am. He recovers first.

“I have a chain in the back. I can get you out of there.”

“Okay,” I say as he pulls in front of my car and then gets out. He seems taller, but that can’t be. He’s wearing a thick blue Carhartt jacket, torn jeans and work boots. He moves to the back of the truck and gets a chain out, which he hooks to the tow hook on the back of my car and then to his truck. He hasn’t said a word.

“Okay, get in,” he says and I get back in my car. With a minimum of revving of his engine and mine, we get my car out of the ditch. I get out to thank him.

Instead, I say, “What are you doing back here?” He wraps up the chain and doesn’t meet my eyes.

“My dad died,” he says as he tosses the chain in the bed of the truck. “Bye, Ivy.” And as quickly as he appeared, he’s gone, and the only remnant of is being here is the cloud of exhaust from his truck.

I slump against my car and raise my head. Snow is just starting to fall, melting as soon as it hits the pavement. 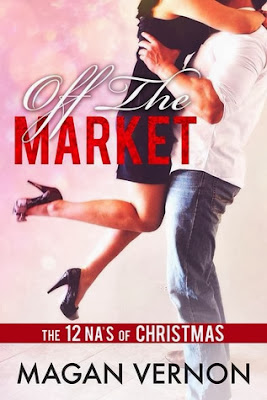 OFF THE MARKET by Magan Vernon

Etta Davis didn't have showing a house penciled into her Christmas plans, but with the other realtors already off enjoying their holiday, she'd been stuck with the task. It wasn't all bad though, the house up for grabs used to belong to the family of her high school sweetheart, Andrew Lawson. Though now dilapidated, thanks to its current owners, it still held the power to bring back forgotten memories and turn the routine showing into something else entirely.

Particularly when Andrew shows up, wanting to buy the house. Now Etta must decide whether a second chance is worth taking the house, and her heart, off the market.

Excerpt from Off the Market:

I looked over the garage at the now rusted backboard. It seemed like only yesterday that Andrew stood on the ladder, wearing his new Bulls jersey, forcing me to stand in the driveway to make sure he got it centered over the garage. The backboard was still crooked, just like it always was since I didn't have a keen eye for getting it level. But Andrew didn't move it. He said he loved it just the way it was because it was my version of straight and he loved me.

Love. That was a word I hadn't heard in a long time. I had a brief string of bad dates in college and my mom always tried to set me up on dates with her friends’ or co-workers’ sons, but none of them worked out. None of them had that spark. That thing that made my stomach do somersaults.

I stepped out of the car, shaking the thoughts of my past life out of my head while my heels dug into the freshly fallen snow. I cursed myself for not putting on some sort of winter footwear. It was a holiday after all, so the client couldn't have complained about my footwear when he was the one inconveniencing me.

I walked up the small path way, now lined with broken solar powered lights, to the big white door. Quickly, I swiped my broker card in the realtor lock box. The green light blinked and I pushed open the door.

There hadn't been more than a handful of showings in the year the house had been listed, but I never once showed it. I was always afraid to come back. Afraid it would have the same feeling as it had now. Like I was coming home.

I'd spent more time in the now faded foyer, underneath the broken chandelier, than I did in my parents’ house. There were prom pictures taken on the grand staircase and nights I spent cuddled with Andrew on the living room couch across from the now dilapidated fireplace.

Mrs. Lawson used to keep the house so nice. She always had candles burning and every single light fixture would shine. The owners after the Lawsons obviously didn't have as much pride in their home. It didn't take long for the bank to foreclose on it and for my real estate company to get tapped to re-sell it. I almost wished I could buy it myself, fix it up and restore it back to its former glory. But I had neither the money nor the time for such things. My life had become my work and without a family of my own there was really no need for the grand four-bedroom house.

A soft knock came at the front door.

"That must be the client. He'd better put in an offer," I muttered, smoothing out my skirt and walking to the front door.

I stopped, my mouth still wide open, because standing in the doorway was one of the former residents of the house, Andrew Lawson.

Buy Off the Market:
Amazon | B&N


GIVEAWAY:
Chelsea M. Cameron and Magan Vernon are teaming up to give away a $10 Gift Card, a tub of Redvines and 10 signed postcards from the cover models of Off the Market.