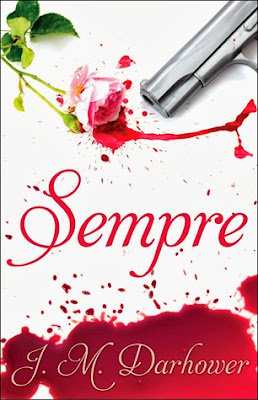 A sexy novel about two seventeen-year-olds—one a victim of human trafficking; the other the son of the man who enslaved her—who fall in love and question everything they ever believed…
Haven Antonelli and Carmine DeMarco grew up under vastly different circumstances. Haven, a second-generation slave, was isolated in the middle of the desert, her days full of hard work and terrifying abuse. Carmine, born into a wealthy Mafia family, lived a life of privilege and excess.

Now, a twist of fate causes their worlds to collide. Entangled in a web of secrets and lies, they learn that while different on the surface, they have more in common than anyone would think.

In a world full of chaos, where money and power rule, Haven and Carmine yearn to break free, but a string of events that began before either of them were born threatens to destroy them instead. Murder and betrayal are a way of life, and nothing comes without a price—especially not freedom. But how much will they have to sacrifice? Can they escape their pasts? And, most of all, what does it mean to be free

My Thoughts:
Looking back on my reading of this book I just think “ugh”, which is never a good thing. Full disclosure: I stopped reading Sempre at 70%, however I did skim through the rest, so I figure I have a right to share my thoughts (unlike a true DNF where I stop reading within the first 30% or so). I was intrigued by the idea of this book, but I mostly wanted to read it because bloggers whose taste I usually share were raving about it. Well, this is one case where we differ, because I definitely didn’t care for this one. I have to say, though, that it kept me reading that long (and this is a long book, so 70% is a lot of pages), and that’s something.

For this book to really work I think you have to be 100% behind the relationship between Haven and Carmine, and I just didn't really get their connection. They were cute together, I guess, but it felt like Carmine changed for no real reason, with no real trouble… but he was still a very complicated character. I didn’t really understand what made Haven care for him, except for the Stockholm Syndrome aspect of him being the first guy her age she’s ever really known, and the first person to treat her relatively well.

One thing that really distracted me about the book, and that I found problematic, was that Haven didn't worry about her mom more often. I could understand her not trying to escape her circumstances because she’s lived her whole life as a slave and doesn't really understand freedom, but to basically never think about her mom at all except in convenient scenes? Very strange. I was also confused by the way her intelligence was presented. She supposedly teaches herself how to read and soaks up information from Jeopardy like a sponge, which, okay, some people are like that. But then she would be completely naive about certain expressions or customs, while others, that seemed more obscure to me, she totally understood. Like can we talk about the cherry coke thing? Carmine asks her to get him a Cherry Coke, and Haven comes back with a Coke with real cherries in, which surprises Carmine. This clearly indicates that there was Cherry Coke in the fridge. Haven, why would you look past the pop can with PINK CHERRIES on it (no reading comprehension necessary) and instead go for regular Coke and add cherries to it? That is such a dumb little thing, but it really bugged me.

I guess the worst thing about this book, from my perspective, is that it was so high stakes -- like serious actual consequences happening, which I did appreciate -- but I never felt nervous or upset about things. I was actually pretty apathetic while characters were getting killed, and that’s a horrible way to feel. I think I was just so bored with repetitive scenes of things like cleaning the house and making dinner that by the time the action scenes were occurring I just didn’t care at all. The book is so incredibly long, and yet it feels like not a lot happens in it. Perhaps most frustrating of all was the fact that, despite its length, the book feels like it’s missing background information and character development -- you’re thrown into the situation without really knowing how it all works. For some books that can be awesome, but for this one it just felt confusing.

While there’s obviously something about Sempre that has made its readers praise it so much, I clearly missed out on that aspect. Sempre lured me in and made me give it chance after chance, but in the end I just couldn’t care enough to actually finish the book.

The Cover:
Not my fave, but it is very fitting.