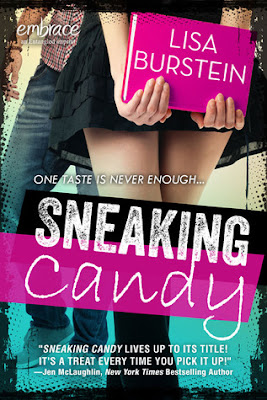 My Thoughts:
I was so pleasantly surprised by Sneaking Candy. It was fun, which I expected, but it was also so smart. I hope that doesn’t make me guilty of the prejudice against romance novels, but then again it’s not every book that tackles the kinds of issues that this book does. I absolutely loved how it took on the literary snobbish perspective that romance and erotica are dredge. The fact that Lisa Burstein wrote a romance novel about a romance novelist who has to deal with the attitude that the people who write romance aren't “real authors”? Awesome.

I found our main character, Candice, to be relatable. She loves writing and she's in a masters program for it, but she has another side to her, writing erotica under a pen name, "Candy". Candice has these two sides to her, and I don’t think it’s spoilery to say that as the book goes on she learns to embrace Candy. I really liked seeing Candice bringing both sides of her together, pulling the Candy persona into her real life.

I thought the relationships in this novel were really well done. There’s Candice’s best friend, Amanda, who is both Candice’s and Candy’s biggest supporter. There’s the problematic relationship with Professor Dylan who’s supposed to be Candice’s mentor and advisor, but who makes no secret of the fact that he hates romance “hacks”. There’s also a romantic relationship with James who is someone who might finally see and accept the real Candice, including the Candy side of her. This relationship is just what Candice wants, but it’s complicated by the fact that he’s Candice’s student and that everyone around the school thinks she’s involved with Professor Dylan.

Sneaking Candy was a really great read. It provided a swoony romance while also addressing, from a unique angle, the prejudices that romance writers (and readers!) face. I really liked seeing Candice come into her own as she figured out her various relationships.

The Cover:
Not my fave, but I do like it.