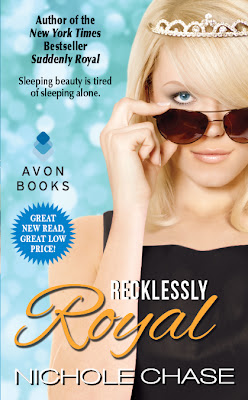 Catherine has spent her life being the perfect princess. She’s kept her hands clean, her head down, and most importantly—men at arm’s length. After all, most men are after only one thing, and for Cathy there’s a lot more at stake than her bed; she has to worry about the fate of an entire nation. But at the rate she’s going, Cathy is afraid she’ll give the Virgin Queen a run for her money. She is tired of waiting for someone good enough to come along. She has a plan, and it all hinges on seducing the one man who seems utterly unimpressed by all things royal. The one man she is tempted by more than any other . . .

When David arrives at the royal wedding of his friend, the newly ordained Duchess Samantha Rousseau, he expected to feel uncomfortable and out of his element, but he wasn’t prepared to be targeted by Prince Alex’s gorgeous younger sister. With Cathy’s giant blue eyes, killer figure, and sense of humor, it won’t take long before he gives in. But when he finds out just how innocent the crown princess really is, will he play the part of knight in shining armor or the dashing rogue?

My Thoughts:
Recklessly Royal is a very cute story, if a short one (the page numbers are for mass market pb format). This book is a follow-up to Suddenly Royal, and this time we’re focused on Cathy, Prince Alex’s younger sister, and David, Sam’s friend and colleague. Cathy and David are sweet, both as individuals and together. I loved how there was an initial attraction and chemistry between them, but that they took their time to get to know one another.

I wasn’t sure what Cathy’s story was about overall. She was pretty well-rounded from the beginning, knowing herself and her role, so I didn’t see a lot of development on that side of things. Where there was development was in the romantic relationship, and how Cathy viewed love and romance. As the book goes on she sees that it is possible to find someone who embraces all aspects of her.

If you’re looking for a sweet but sexy romance, then I definitely recommend Recklessly Royal. I basically find any book about royalty to be fun, and here you get to experience the glamourous parts while also seeing the negative attention and lack of privacy. This is one of those books that isn’t life changing, but it’s a fun, enjoyable read nonetheless.