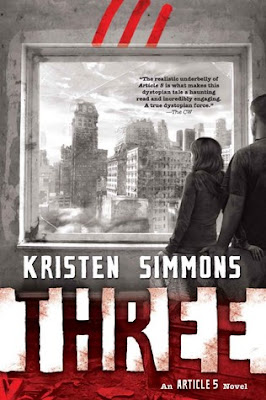 Ember Miller and Chase Jennings are ready to stop running. After weeks spent in hiding as two of the Bureau of Reformation’s most wanted criminals, they have finally arrived at the safe house, where they hope to live a safe and quiet existence.

And all that’s left is smoking ruins.

Devastated by the demolition of their last hope, Ember and Chase follow the only thing left to them—tracks leading away from the wreckage. The only sign that there may have been survivors.

With their high profile, they know they can’t stay out in the open for long. They take shelter in the wilderness and amidst the ruins of abandoned cities as they follow the tracks down the coast, eventually finding refugees from the destroyed safe house. Among them is someone from Chase’s past—someone he never thought he’d see again.

Banding together, they search for a place to hide, aiming for a settlement a few of them have heard about…a settlement that is rumored to house the nebulous organization known as Three. The very group that has provided Ember with a tiny ray of hope ever since she was first forced on the run.

Three is responsible for the huge network of underground safe houses and resistance groups across the country. And they may offer Ember her only chance at telling the world her story.

My Thoughts:
Kristen Simmons concludes her fabulous Article 5 trilogy with a book full of incredibly high stakes. It seems like there’s danger and risk for the main characters at every turn, which made for an awesome, but nerve wracking, read.

Ember has come so far from the first book. There’s a real transformation in her character that is documented throughout the series. She’s brave and strong, but she also questions who she is: the person she was versus who she's become. Ember struggles a bit, not feeling entirely comfortable with the things that she's done personally and the things that she's accepted because of the situations they’ve been in.

I absolutely loved the interactions between Ember and Chase, the fact that they stayed strong and recognized how they're so much better together, but that there were still moments of tension between them. Chase is such an interesting character, and I adore him as a love interest. He’s a great guy, but he’s not that “perfect” character. Chase struggles sometimes, and he doesn’t always like sharing about his problems. Chase is this completely tough macho soldier type, but he’s also so much more than that. He has panic attacks, and he doesn’t like fighting, even though that’s what he’s good at. He’s strong and desirable, but he has a tough time dealing emotionally with the things that he’s done.

The beginning of Three is a teensy bit slow. It’s not that I found it boring at all, but I wanted more action and less sitting around and talking about what to do. Very quickly this changed and the book became extremely exciting, with crazy reveals and hold your breath type of action. Overall I thought this was a completely perfect end to the trilogy. It didn’t wrap everything in a bow with a magical solution, but neither did it leave you hanging with some far off hope like how another certain dystopian trilogy did. The end of Three leaves off with the main characters in a good place, giving the reader even more hope for the greater political situation. This was such a great book, and I really can’t recommend this trilogy highly enough.

The Cover:
Not my favourite, but I like how the three books look together.