The Immortal Crown by Richelle Mead 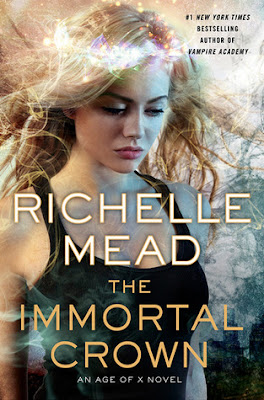 The #1 New York Times bestselling author of the Vampire Academy and Bloodline series returns with the second installment in her acclaimed Age of X series.

Gameboard of the Gods introduced religious investigator Justin March and Mae Koskinen, the beautiful supersoldier assigned to protect him. Together they have been charged with investigating reports of the supernatural and the return of the gods, both inside the Republic of United North America and out. With this highly classified knowledge comes a shocking revelation: Not only are the gods vying for human control, but the elect—special humans marked by the divine—are turning against one another in bloody fashion.

Their mission takes a new twist when they are assigned to a diplomatic delegation headed by Lucian Darling, Justin’s old friend and rival, going into Arcadia, the RUNA’s dangerous neighboring country. Here, in a society where women are commodities and religion is intertwined with government, Justin discovers powerful forces at work, even as he struggles to come to terms with his own reluctantly acquired deity.

Meanwhile, Mae—grudgingly posing as Justin’s concubine—has a secret mission of her own: finding the illegitimate niece her family smuggled away years ago. But with Justin and Mae resisting the resurgence of the gods in Arcadia, a reporter’s connection with someone close to Justin back home threatens to expose their mission—and with it the divine forces the government is determined to keep secret.

My Thoughts:
I can easily say that The Immortal Crown is even better than the first book, Gameboard of the Gods, which I also thoroughly enjoyed. Gameboard is a great book, but it had the huge task of introducing readers to a new world. Richelle Mead did a great job with that, but this book was still more enjoyable because of how easy it was to fall back into the world, already knowing how everything worked and how it was all set up.

I feel like the first thing about this book that I have to mention is the major UST (unresolved sexual tension!) continuing between Mae and Justin. I just adore how close they became in this book. There’s sexual chemistry dancing around the edges, sure, but it’s so much more. Them together is just this natural thing, and seeing how much they began to care for one another? So. much. swoon.

The Immortal Crown features even more influence from the gods. There are so many things changing and going on in regards to them. There’s definitely more pressure toward Justin and Mae from deities to commit and work with them. Another huge aspect of this book is the diplomatic mission to Arcadia. Senator Darling has a campaign for peace talks and to work out agreements, but of course many other things happen because of this.

There really is something for everyone in this series and in this book. There’s action, there’s serious romance-y feelings and affection, there’s mysterious things happening with the gods, and there’s a CRAZY TWIST. Seriously, that ending? Oh my word. I wouldn’t call it a cliffhanger, per se, but it’s a definite twist. It’s something I didn’t see coming, even though there were some hints. It was a gasp out loud moment, and it totally changes everything -- or at least a lot of things.

Basically I just think this series is flawless. It is filled with amazinggggg characters who you care about, and it takes place in a very interesting society that Richelle has build up. Absolutely recommended.

The Cover:
Good but not great? Hmm..