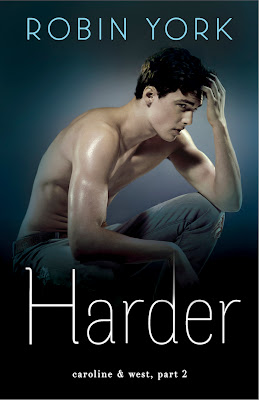 In Robin York’s provocative new novel, two young ex-lovers find themselves together again in the shadow of tragedy—and an intense, undeniable attraction.

Caroline still dreams about West. His warm skin, his taut muscles, his hand sliding down her stomach. Then she wakes up and she’s back to reality: West is gone. And before he left, he broke her heart.

Then, out of the blue, West calls in crisis. A tragedy has hit his family—a family that’s already a fractured mess. Caroline knows what she has to do. Without discussion, without stopping to think, she’s on a plane, flying to his side to support him in any way he needs.

They fought the odds once. Losing each other was hard. But finding their way back to each other couldn’t be harder.

My Thoughts:
I liked Robin York’s New Adult debut, Deeper, and I very much enjoyed this second installment as well. That being said, the beginning of this book (perhaps the first third or more?) is brutal to read. It’s really dark and twisty and hard to take. Seriously, Robin York: rip my heart out, why don't you?! To put it bluntly, the book starts with some serious shit going on. It was difficult to read about how much West hates himself and how determined he was to push Caroline away. What he’s been through is A LOT (like, capital letters necessary for emphasis A LOT), but there’s this thing he does to Caroline, and… it may be the worst thing I’ve read in a book for a “hero” to do to the “heroine”. Seriously, it’s really a make it or break it situation, and I can see a lot of readers throwing down the book because of it. I got through it, but I honestly didn't really accept it or forgive it, either.

So, Caroline. If I was Caroline, I definitely wouldn’t have forgiven West or understood him, but I guess that’s the beauty of West and Caroline. On the one hand I, as a reader, was so offended on her behalf. I wanted her to react differently, to rage and kick up a fuss. But I’m also really interested and glad that she didn’t react that way, because that’s not Caroline. Caroline is a constant surprise to me. It’s not that she’s a robot with no feelings, but but she understands West and his motivations. She's willing to look past things, she's willing to forgive him, but she's also not going to take anything from him. Caroline challenges West to be a bigger and better man, and even though she's hurt by his actions, she doesn't let him get away with pushing her away. I admire Caroline, because she’s very complex, and she interests me because her process for everything is so different from mine.

Somehow, despite all the darkness in this book, I really feel like Caroline and West are MEANT TO BE. I liked the journey of them trying to be together, navigating the darkness and finding their way back to one another. Deeper is really about Caroline finding her way, while Harder is about West finding his. In both stories they find their own way, but have each other to lean on, and I really like that. Another great aspect is West with his little sister. I love how Robin York didn’t write everything as perfect, that because they were together as a family everything was suddenly great. I liked that there were issues and that West was impatient and overbearing at times. It was so fitting that West wanted to control everything about his sister’s life, to make it good in the only way he knew how. He feels like his sister is the one thing that redeems him. Besides Caroline, she's the one good part of his life.

I also appreciated that Harder continued on with the revenge porn plot of the first book, with Caroline finding some justice, in a different way than she first intended. I liked that Caroline’s personality shone through in this way as well, that she uses her ambition and her smarts, that she figures out to stand on her own, separate from what her father wants. Deeper and Harder are not easy reads at all, but they are important ones. They take angst and forbidden romance and the college setting of New Adult and bring everything to a higher intellectual level, with real, important issues being discussed within the pages. They’re books about rising above tough situations, about putting painful pasts behind, about finding the things and people that make life worth living. If you’re looking for a New Adult book with grit and heart, I definitely recommend you read Harder and the first book, Deeper.

The Cover:
Kind of meh? I like that the two match, but they're really not my favourites.


Be sure to follow along with the BLOG TOUR for more reviews, excerpts, interviews, etc. 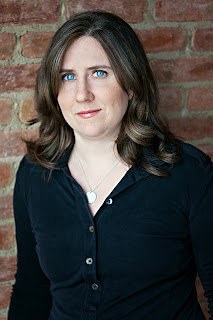 About Robin:
Robin York grew up at a college, went to college, signed on for some more college, and then married a university professor. She still isn’t sure why it didn’t occur to her to write New Adult sooner. Writing as Ruthie Knox, she is a USA TODAY bestselling author of contemporary romance, including RITA-finalists About Last Night and Room at the Inn. She moonlights as a mother, makes killer salted caramels, and sorts out thorny plot problems while running, hiking, or riding her bike.