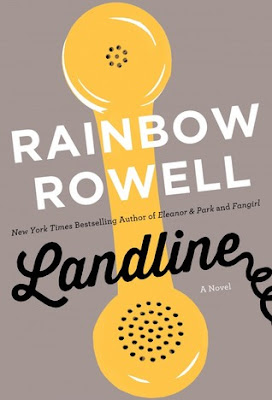 Georgie McCool knows her marriage is in trouble. That it’s been in trouble for a long time. She still loves her husband, Neal, and Neal still loves her, deeply — but that almost seems besides the point now.

Maybe that was always besides the point.

Two days before they’re supposed to visit Neal’s family in Omaha for Christmas, Georgie tells Neal that she can’t go. She’s a TV writer, and something’s come up on her show; she has to stay in Los Angeles. She knows that Neal will be upset with her — Neal is always a little upset with Georgie — but she doesn’t expect to him to pack up the kids and go home without her.

When her husband and the kids leave for the airport, Georgie wonders if she’s finally done it. If she’s ruined everything.

That night, Georgie discovers a way to communicate with Neal in the past. It’s not time travel, not exactly, but she feels like she’s been given an opportunity to fix her marriage before it starts . . .

Is that what she’s supposed to do?

Or would Georgie and Neal be better off if their marriage never happened?

My Thoughts:
Landline is a gorgeous, funny, and lovely read: exactly what you would expect from a Rainbow Rowell novel. It’s a very emotional novel, one that’s sad and bittersweet in a lot of moments, but mostly it just makes you feel everything. Rainbow’s words wrap me up in knots and they never let me go until the end. Even then there's this connection, these feelings for the people you've spent time reading about.

In Landline, Georgie, our main character, is lost. She’s lost in her marriage, but also a little bit in life. This is a book about priorities, about how we spend our time. It’s about marriage and love and how to reconcile the two. It’s about combining two lives, about staying in love and staying together, even when it might be easier to give up. Landline focuses on all aspects of love and romance, from the little things to the grand gestures, to just plain having to put in the effort. It’s so easy in novels to paint one person as the villain who needs to change, but Rainbow’s writing is more nuanced than that. She writes about people and situations that feel real, which means that both Georgie and Neal are flawed. They both make bad decisions and they both let things go, not having real conversations about their issues.

Also as usual in a Rainbow Rowell novel, Landline features great side characters. There’s Georgie's sister Heather, as well as Georgie and Heather’s flamboyant dog loving mom. Neal and Georgie's daughters steal several scenes, and I especially loved Noomi who meowed like a cat. The plotline of the book is interesting as well, something that could be considered magical realism, considering present-day Georgie spends a lot of the time on a magical telephone talking to Neal in the past.

Basically, Landline is such a lovely, happy, and sweet book, despite all the gut wrenching scenes it took to get there. I can’t say much more than: basically? this book is perfection.