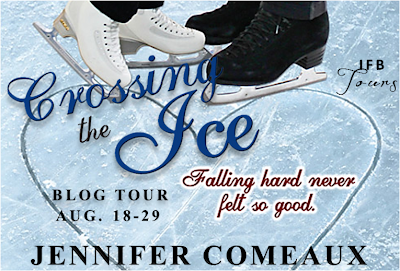 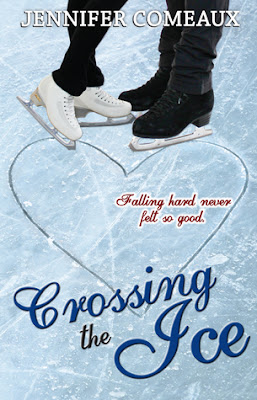 Pair skaters Courtney and Mark have one shot left at their Olympic dream. They vow not to let anything get in their way, especially not Josh and Stephanie, the wealthy and talented brother and sister team.

The heart doesn’t always listen to reason, though...

The more time Courtney spends with sweet, shy Josh, the harder she falls for him. But they are on opposite sides of the competition, and their futures are headed in opposite directions. Will their friendship blossom into more or are their paths too different to cross?

My Thoughts:
When I read a Jennifer Comeaux book I know that I can count on reading a sweet romance, and that was definitely the case here. I loved reading about Courtney now that she’s all grown up. Courtney first appears as a minor character in Jennifer’s first series, though you don’t have to read those books to understand Crossing the Ice. Courtney and her skating partner Mark want nothing more than to go to the Olympics, so it’s incredibly problematic when their rivals (Josh and his sister Stephanie) come to skate at the same rink, under the same coaches. Of course it’s even more problematic when Courtney enjoys Josh’s company much more than she’s willing to admit.

Courtney and Josh are very sweet together. I liked that Josh is the shy guy, hanging back and being friends with Courtney at first, despite his feelings for her. It fit with his character so completely. His inaction when it came to the relationship and his life choices wasn’t always appealing, but it was so completely him. Courtney, on the other hand, is more of a “go getter”, willing to fight for what she wants. The two of them have some very sweet scenes together, and I loved where they ended up.

As always, the skating parts of the book were so well done. I honestly don’t know much about skating at all, but reading about the sport through Jennifer’s writing makes it jump off the page so that you can almost picture the routines in your head. Jennifer also excels at making readers feel what her characters feel. You celebrate with them, and so too you feel their disappointments.

Crossing the Ice is a great story full of characters who I'd love to read more about. If you're looking for a cleaner New Adult read that focuses on the characters lives and choices just as much as it does the romance, I would suggest you pick this book up. Crossing the Ice is a sporty, sweet romance that I would not hesitate to recommend.

It was difficult to pick quotes that weren't too spoilery, but here are a couple short ones to whet your appetite for the book:

He shifted nearer, sliding his hand around to my lower back, and the heat from his touch radiated through my cotton shirt, my skin, and into the deepest cells of my body. I didn't dare look up because there would be only a narrow space between our faces. Between our mouths...

Another flood of emotion hit me, this time like a tidal wave. Lightning illuminated the car, showing me the wanting in Josh's eyes, and everything I felt for him rushed to the surface. I couldn't fight the resistance anymore.

About Jennifer:
Jennifer Comeaux is a tax accountant by day, writer by night. There aren’t any ice rinks near her home in south Louisiana, but she’s a diehard figure skating fan and loves to write stories of romance set in the world of competitive skating. One of her favorite pastimes is traveling to competitions, where she can experience all the glitz and drama that inspire her writing.

Be sure to follow along with the rest of the tour on Itching for Books.