I'll Give You the Sun by Jandy Nelson 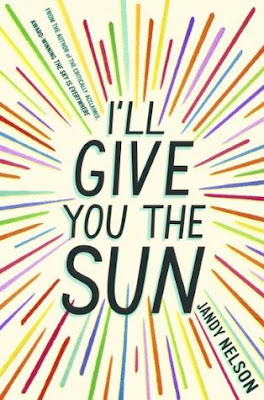 Jude and her twin brother, Noah, are incredibly close. At thirteen, isolated Noah draws constantly and is falling in love with the charismatic boy next door, while daredevil Jude cliff-dives and wears red-red lipstick and does the talking for both of them. But three years later, Jude and Noah are barely speaking. Something has happened to wreck the twins in different and dramatic ways . . . until Jude meets a cocky, broken, beautiful boy, as well as someone else—an even more unpredictable new force in her life. The early years are Noah's story to tell. The later years are Jude's. What the twins don't realize is that they each have only half the story, and if they could just find their way back to one another, they’d have a chance to remake their world.

This radiant novel from the acclaimed, award-winning author of The Sky Is Everywhere will leave you breathless and teary and laughing—often all at once.

My Thoughts:
If I had three words to describe this book, those (very fancy) words would be: So. Freaking. Gorgeous. (!!!) I've been anticipating this book ever since it was announced that Jandy Nelson had a second book coming out. I was so excited to receive an ARC that I was planning on dropping everything and reading it right away. But that didn’t happen. In fact, I've been holding on to the ARC, almost scared to read it. You know when you anticipate a book SO MUCH that you're terrified it will disappoint you? Yeah, I had that with this book. But yesterday I finally felt ready, and of course, OF COURSE, I'll Give You the Sun lived up to every expectation I had. I’m not sure why I ever doubted. Jandy Nelson, how do you write so beautifully?! You're in a club of few people (Melina Marchetta and Gayle Forman being a couple of the others) whose words inspire me so greatly, whose books make me feel SO MUCH. The Sky is Everywhere is one of my favourite books of all time (I read it pre-blogging days, so no review -- must get on that!), but I’ll Give You the Sun is definitely in good company with it.

I’ll Give You the Sun is the story of Noah and Jude, two twins who have little in common, and yet have a seemingly unbreakable bond. The story drifts between Noah and Jude, between “before” and “after” -- before the twins separated, before their mom died, after so many disasters have happened, after their family broke apart. The book switches between two time periods, but they’re very large chunks of time, and it’s easy to keep track of everything. As you read it, it’s a little bit of a mystery: why have the twins basically switched personalities? What did Jude do that was so awful? How did everything get like this?

Beyond that description it’s difficult (and perhaps even unnecessary?) to discuss a lot of the book’s plot. It’s a meandering story, and yet there’s so much going on, but a lot of that has to do with the emotions of the story. It’s a story where you don’t need to know a lot going in, because the joy of I’ll Give You the Sun is discovering Noah and Jude’s world and unraveling their stories. There are few books which have wrapped me up emotionally as this one did. Throughout the book I felt so full, whether it be in a happy or devastated way, and at the end of the book I just wanted to cry or burst out laughing -- maybe both. The real heart of the story is about the family and their relationships with each other, as well as the romantic relationships that Noah and Jude have. Also central to the story is art. Art is Noah’s lifeblood, it’s his oxygen, it’s all he can imagine doing. Art is also a part of Jude, but it’s almost something she resents, and then it becomes something of a punishment for her. The beauty of art and what it means to create and so many other things are discussed here in a gorgeous, completely non-pretentious way. I mean, this is fabulous literary fiction, but I like it think of it as accessible literary fiction.

I felt very protective of Noah’s character. He’s easy to cheer for and to like. He’s the outsider, the one who feels different and who expresses it through his art. That’s not to say he’s perfect, because he definitely has his moments of questionable behaviour. Jude, on the other hand, is prickly. She’s harder to like, especially at some points, but she’s a lovely character, too. Jude is flawed, but who isn’t? She’s not a bad person, she’s just made some mistakes that have come out very wrong. Ultimately, Jude is a girl trying to find herself and her place, dealing with crappy situations and reacting in the only way she knows how. I loved her for her flaws, and she seemed all the more real because of them.

This book is so much about relationships. It’s about the twins and how they fit together now that they’re older and have been through so much. It’s about the way they feel about their dead mother and how they communicate with their living, but emotionally absent, father. There’s also an incredible mentor-mentee relationship between Guillermo and Jude, Guillermo being a sculptor who has an unknown, but important, connection to Jude and Noah. There are also bits of romance. The romances here are not really the focus of the book, but I still loved Brian and Oscar. Brian is the perfect fit for Noah, and even though their relationship (or lack thereof?) is painful, it’s beautiful too. The energy between them is just perfection. Oscar is this sweet but messed up guy. He’s been through a lot, and while it’s not easy for him to deal with, the connection he feels with Jude is undeniable.

This book is sweet, it’s sad, it’s incredibly emotional. I really can’t say enough good things, so I’ll finish by saying that I absolutely loved this book, and I encourage everyone to read it.

The Cover:
I love it! So perfect for this book.