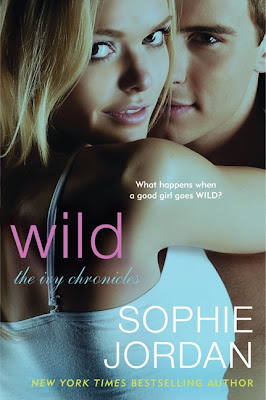 Months after her boyfriend dumped her, Georgia can still hear the insults he hurled at her. Boring. Predictable. Tame. Tired of feeling bad, she’s ready to change her image, and go a little wild. What better way to prove her ex wrong than a hot night of sexual adventure at the secret campus kink club?

In the shadowy den of the kink club, she unexpectedly runs into Logan Mulvaney, her friend’s little brother. A player extraordinaire too hot for his own good, he may be younger, but the guy is light years ahead when it comes to sexual experience. Now he’s telling her to go home—“good girls” don’t belong here!

Georgia is tired of having others define her. She’s going to teach Logan a lesson he won’t forget—one white hot, mind-wrecking kiss . . . that leads to another . . . and another . . . and. . . . Realizing she’s way in over her head, Georgia runs.

Only Logan won’t let her go. Everywhere she goes he’s there, making her want every inch of him. Making her forget who she is. Who he is. And just how wrong they are for each other.

My Thoughts:
It would be an understatement to say I was excited when I saw that Logan was one of the main characters in Wild. I was totally ecstatic, because I just had a feeling he would be an incredibly sexy and interesting character to delve into. And, of course, that prediction was right. Logan, Logan, Logan… what is there to say about him?! Well, he’s both wise and experienced beyond his years. He is in no way a typical high school senior, and in a lot of other circumstances I would call bullshit on this guy being a high schooler, but Sophie Jordan pulls it off beautifully. Logan’s life hasn't been typical at all. He's basically raised himself, since his mother passed away and his father is a drunk. Logan’s older brother Reece (protagonist of book 1, Foreplay) has done his best, but he's only a few years older and he was away at school for a time. What’s so great about Logan’s character is that he’s a lot deeper than you think he is. You get to see his serious side here, the one that no one else really acknowledges.

Georgia was a good main character, but a very frustrating one as well. Georgia’s mother dictated her whole life, from the biggest choices to the smallest details. Georgia had her own likes and wants, but she never let them out. It’s definitely a tough situation to be in, and one you can’t judge from the outside, but it was hard to see Georgia so beaten down and unhappy. I understood the predicament, but I really wished Georgia had stood up for herself sooner.

So… Georgia and Logan together? Pretttty epic. There aren’t a lot of older woman/younger guy stories out there, so I was really excited for this one, especially since Logan is the experienced one in the relationship. The two of them together is primarily about sexual attraction at first, but it becomes more without Georgia wanting to admit it. She’s totally in over her head with Logan, because while she tries to tell herself he’s just a kid she can't stop thinking about him. These two seem like total opposites, but for some reason they totally work. Georgia grounds Logan and sees him how he really is, and Logan brings out Georgia's fun side and her real self, the one she wants to keep hidden.

I absolutely loved experiencing the relationship between Logan and Georgia and seeing everyone's reactions to them. Wild was an awesome read and this has been a great series overall. It brings in tropes and themes that you see in a lot of books and that you expect from NA, but the characters are so real and interesting that they truly make the books. Now that this series is complete I hope that Sophie Jordan will continue to write in the New Adult category.