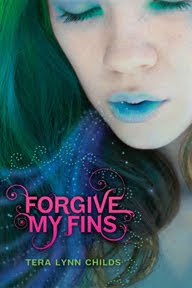 Synopsis: (from Goodreads)
Lily Sanderson has a secret, and it’s not that she has a huge crush on gorgeous swimming god Brody Bennett, who makes her heart beat flipper-fast. Unrequited love is hard enough when you’re a normal teenage girl, but when you’re half human, half mermaid like Lily, there’s no such thing as a simple crush.

Lily’s mermaid identity is a secret that can’t get out, since she’s not just any mermaid – she’s a Thalassinian princess. When Lily found out three years ago that her mother was actually a human, she finally realized why she didn’t feel quite at home in Thalassinia, and she’s been living on land and going to Seaview high school ever since, hoping to find where she truly belongs. Sure, land has its problems – like her obnoxious, biker boy neighbor Quince Fletcher – but it has that one major perk – Brody. The problem is, mermaids aren’t really the casual dating type – when they “bond,” it’s for life.

When Lily’s attempt to win Brody’s love leads to a tsunami-sized case of mistaken identity, she is in for a tidal wave of relationship drama, and she finds out, quick as a tailfin flick, that happily-ever-after never sails quite as smoothly as you planned.

My Thoughts:
This was a really cute, fun book that I was able to fly right through. You could definitely use it as an end of summer beach book (especially because of the mermaid/water theme!), but if you're looking for a bit more depth, this book has that as well. I really liked the main character, Lily, even though she was a bit clueless at times. I think she fell into the trap that a lot of us fall into sometimes: that just because she's had certain feelings or beliefs for a long period of time, she believes them to be real... that moving away from those feelings is somehow dangerous or wrong. Lily's devotion to Brody despite not actually knowing him that well was a bit annoying, but I think it was forgivable. I generally found Lily, and her ocean-life related swearing (e.g. saying "damselfish!"), quite endearing.

One problem I had with the book was everyone's reactions to Lily when she admitted she was a mermaid. I found their immediate acceptance quite unbelievable. I can accept Quince's reaction, because we get more details about how he thinks, and there's a bit more of an explanation behind how he reacts. But I thought Shannen and Brody were way too calm about the whole thing, especially since the mermaid world is supposed to be such a secret. I would have thought some disbelief or laughter would be appropriate, but they seem to automatically accept the fact that mermaids exist and the person they've known for three years is one of them. Besides this small problem, however, I found the book very enjoyable. I loved Tera Lynn Child's writing style and her humour, and I am definitely going to pick up her other books from the library soon. If you enjoy mermaids and/or light fantasy titles, you will probably enjoy 'Forgive My Fins'. To me it read like a very cute romance and coming of age story which just happened to involve a mermaid. However, you are also able to become immersed in the mermaid kingdom if that's the type of story you like.

Find Forgive My Fins by Tera Lynn Childs on Goodreads, Book Depository, & Amazon.ca
Posted by Ashley @ Book Labyrinth at 10:00 AM