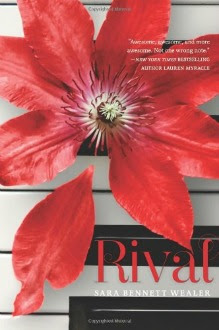 Synopsis: (from Goodreads)
What if your worst enemy turned out to be the best friend you ever had?

Meet Brooke: Popular, powerful and hating every minute of it, she’s the “It” girl at Douglas High in Lake Champion, Minnesota. Her real ambition? Using her operatic mezzo as a ticket back to NYC, where her family lived before her dad ran off with an up and coming male movie star.

Now meet Kathryn: An overachieving soprano with an underachieving savings account, she’s been a leper ever since Brooke punched her at a party junior year. For Kath, music is the key to a much-needed college scholarship.

The stage is set for a high-stakes duet between the two seniors as they prepare for the prestigious Blackmore competition. Brooke and Kathryn work toward the Blackmore with eyes not just on first prize but on one another, each still stinging from a past that started with friendship and ended in betrayal. With competition day nearing, Brooke dreams of escaping the in-crowd for life as a professional singer, but her scheming BFF Chloe has other plans. And when Kathryn gets an unlikely invitation to Homecoming, she suspects Brooke of trying to sabotage her with one last public humiliation.

As pressures mount, Brooke starts to sense that the person she hates most might just be the best friend she ever had. But Kathryn has a decision to make. Can she forgive? Or are some rivalries for life?

My Thoughts:
This book shares a very interesting look at competitive high school singing. There have been a lot of comparisons between this book and the show Glee because of this, but when it comes to the singing aspect, this book has it beat, hands down. This is partially because we get a more realistic look at the competitive nature of these clubs, and partially because we don’t have to deal with Mr. Schuster’s rapping, annoying laugh, and/or bad life choices (ouch! can you tell Season 2 of Glee left me jaded?).

More than the singing, though, this is a story about the friendship and rivalry between two girls. It’s a look at the politics and insecurities of friendship, and what girls will do to each other, especially over a guy. This close look at what friendship is was saddening, but also sweet at times, and it made for a fascinating read.

I absolutely loved the two main characters. They are both people who appear, figuratively, black and white, but of course this is never true in the best stories. Things get murky as the girl you want to support makes questionable decisions, and the supposed queen bitch is vulnerable, more sitting on the sidelines and letting things happen on her behalf, rather than being the big bad instigator like it initially appears. It’s awesome how you end up rooting for both characters despite, and because of, their flaws.

Contemporary romance is where my heart lies, but I liked how the girls were the main stars of this one. There were little glimpses of romance, and there were fights over boys, but this is truly a story about rivalry and friendship, and I totally appreciated it. However, I also appreciated Matt. Most of the nerds in books are quasi-nerds who, you know, maybe read comic books and wear glasses. This is not Matt. Matt is a full on nerd, and I totally hearted him. When I get to read about fanfiction and totally dorky online hobbies in a novel, I am a happy person.

So, overall: a very well written book, a totally cool musical aspect that I haven’t seen in many other places at all, and an intriguing look at what makes people friends -- or rivals.

The Cover:
There's something so pretty about it! Love the piano in the background.