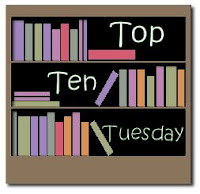 Top Ten Books I Feel As Though Everyone Has Read But Me
1. Hush Hush by Becca Fitzpatrick: I actually won a copy of this at one point, but I ended up giving it away. From what I've heard of Patch the book doesn't appeal to me at all. Still, I feel like practically every YA blogger has read it.

2. Pride & Prejudice by Jane Austen: I'm terrible, I know! I've watched so many different adaptations of this, and even read some P&P inspired books, but I haven't read the original. There's no excuse because I have the book on my Kobo.

3. Looking For Alaska by John Green: The only John Green I've read is 'Paper Towns', which I adored, so I'm not sure why I haven't read this one.

4. Beautiful Creatures by Kami Garcia & Margaret Stohl: Well, this is a partial truth. I started reading it and I got about 1/4 of the way but I was SO FREAKING BORED. A very unpopular opinion, I know.

5. The Book Thief by Marcus Zusak: I've had this one on my TBR list for so, so long, but I just haven't picked it up for some reason.

6. Thirteen Reasons Why by Jay Asher: This one has been around almost every blog, and I had it on my radar for a long time before the resurgence earlier this year, but I just haven't read it yet.

7. The Thief by Megan Whalen Turner: I have no excuse for this one because I bought a copy of the book either earlier this year or late last year. I've heard so many good things about the series!

8. Forever by Judy Blume: I grew up in a semi-conservative Christian household, so even though I basically always chose my own books, I don't think I really ever had the opportunity to be exposed to Judy Blume's works.

9. Alanna: The First Adventure by Tamora Pierce: I never really read much fantasy up until a couple of years ago, but I've heard SUCH good things about Alanna that I will definitely have to read this series at some point.

10. Crank by Ellen Hopkins: I'm just... not really interested, which I know sounds bad. I've heard how powerful these books are, but I just don't like books about drugs and I'm not a big fan of novels in verse either.

I have to say this list was hard for me, because apparently I have very commercial tastes. There are probably some glaring omissions, but these are the ones I could think of, and even then I had to consult some lists.

So, which books haven't you read which you feel everyone else has? I look forward to checking out everyone's lists!