Word on the Street Toronto Recap

On Sunday I headed into Toronto with my Mom to attend Word on the Street. I had never been before, so I was pretty excited to see what it was all about. I think we got to Queen's Park at about noon-ish, and the very first booth we saw was from Simon & Schuster Canada. They were selling kids and YA books for $5 hardcovers and $3 paperbacks. I picked up a Deb Caletti book and some Kenneth Oppel buttons. There were some other awesome books at the booth, but it seemed like any of the ones I really loved or was interested in I already owned. They tried to sell me 'Hush, Hush' and I was all "thanks, but no thanks."

Next up was HarperCollins Canada where half the booth was frontlist titles for 20% off and the other half were books for $3 and under. I picked up some Divergent and Delirium temporary tattoos and managed to pick up a Jessica Brody book for $3. This was a fabulous booth with fabulous deals, but the crowd was a real bummer. A lot of people were great, but the majority were incredibly pushy and rude. You really couldn't even get to the table properly to see what they had, and people would cut you off and elbow you. Not so nice! I'm surprised I even managed to get to the front and grab one book. 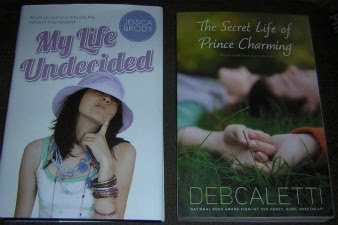 We wandered around to some more booths and then came across the Harlequin booth where they had a great deal of 3 books for $5. I was hoping they would have the Iron Fey books but they were out of them. They didn't really have a lot of YA books, but I did manage to pick up the 3 Past Midnight books (I scored the last copy of One Hundred Candles that they had). I also got given a (non-YA) chapter sampler signed by 2 of the authors and bought my Mom 4 books (1 was free, actually, and she got 2 of them signed). 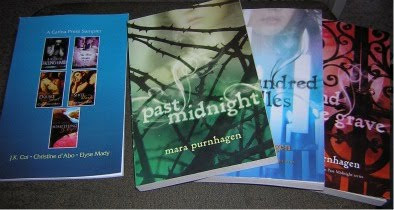 At a little after 2:00 we made our way to the 'Remarkable Reads' tent for the Kelley Armstrong Hour. My Mom and I sat down and were talking, and then Zahida (Musings of a YA Reader) gave me a rock star moment by recognizing me from my blog. Yay for blogger encounters!

Before Kelley came on stage we got happy face stickers that we could redeem afterward for cupcakes that had the jewel symbols from the Darkest Powers books on them. Score! ;) 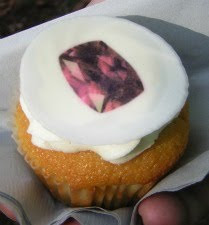 Kelley came on stage and she had lots of goodies (mugs, books, ARCs) to give away to those who could answer trivia questions. Cue me cursing my inability to retain specific details from books unless I’ve read them in the past couple of weeks. 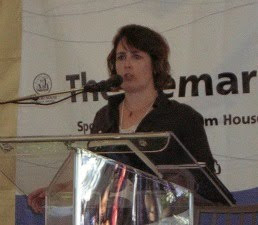 There was a reading of the prologue of The Gathering and Kelley interspersed her trivia questions with Q&A from the audience. Here’s what I remember, in no particular order:


After the talk and Q&A were over, Zahida and I headed into the autograph line which was relatively long considering the venue. We had made our way to get in line fairly quickly, and then a few minutes later my Mom came over with a lovely surprise. Kelley had said that the first two people who asked would get the bags that she had used to bring the prizes on stage. One of them had already gone and my Mom went and asked for the other one for me. See, this is why you hang out with your Mom and go places with her even when you're 25. ;) 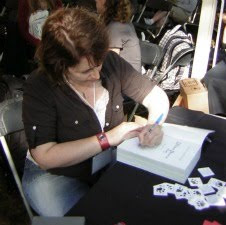 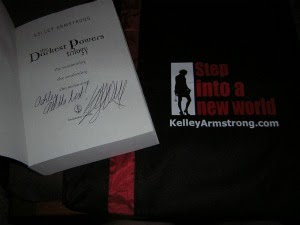 Kelley signed my Darkest Powers omnibus (yes I totally dragged that honking thing with me to Toronto, haha) and was also giving away very awesome swag, including the cutest bookmarks with chibi Darkest Powers and Darkness Rising characters.

After getting my book signed we headed over to the 'This is Not the Shakespeare Stage' where Lesley Anne Cowan, Alyxandra Harvey, Teresea Toten, and Heather J. Wood were doing their "That's What She Said" program. We missed Lesley Anne's reading and most of Alyxandra's, but we heard all of Teresea and Heather's. 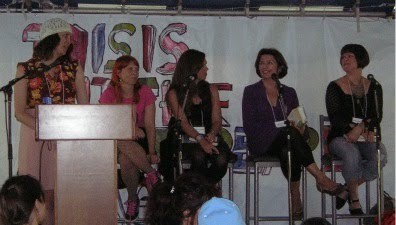 After that was over we headed back around to look at more booths. For some reason I had an inkling I should check out Simon & Schuster's tent again even though it was back at the beginning where we entered the park. My inner voice was spot on because S&S had reduced kids and YA titles to $1! I just couldn't resist the price, so I picked up these lovelies:

We headed back to the 'This is Not the Shakespeare Stage' for Lesley Livingston and Robert J. Sawyer who were doing a sci-fi versus fantasy debate type of thing. The schedule for that tent was behind so we got there in time to catch the end of Catherine Austen's Q&A. She had been talking about dystopias and her new book 'All Good Children'. I got a couple of bookmarks from her and then settled in to hear Robert and Lesley. 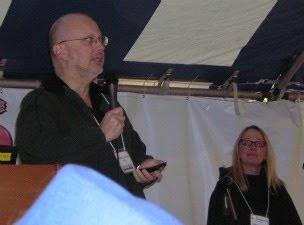 Let me say that these two were hilarious, both together and in their individual readings. Rob read a unique piece from his WWW Trilogy which was in the format of an interview between the main character (Caitlin) and Jon Stewart, and it gave a pretty good idea of what the series is about. Lesley read a part from Once Every Never where Clare and Al go to see Al's hot geek of a cousin, Milo, to see if he can help them figure out what's going on (aka can Clare really go back in time?)

Then they staged a little debate, although it was more of an agreement of what sci-fi is versus what fantasy is. They talked about science fiction being things that have to be possible, at least sometime in the future, while fantasy is those things which are not possible. However both genres have to be convincing: science fiction has to convince people and make sense externally in the world of technology and science. Fantasy has to have an internal world structure where there are still rules and theories to stick to. Both Lesley and Rob agreed that they have to be convinced as the author before it can make sense and convince readers. There was also a short discussion based on a question about theories of time travel. There were references to Star Wars and the TARDIS and other ultra-cool and ultra-nerdy things. Rob and Lesley agreed that Star Wars is fantasy masquerading itself as sci-fi because of space ships, etc. 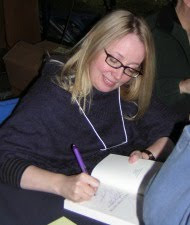 After the reading and discussion Zahida and I lined up to get our newly purchased copies of Once Every Never signed. We had both been wanting it for a while, so it was the perfect opportunity to get a signed copy. 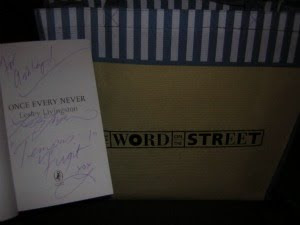 Signed book and pretty, pretty bag star in a very badly lit picture
By the time this was done it was after 6:00 and WOTS was packing up! It was a super long day, but a lottttt of fun! It was super cool that Zahida recognized me because we basically had the same afternoon planned and it gave us an opportunity to hang out. 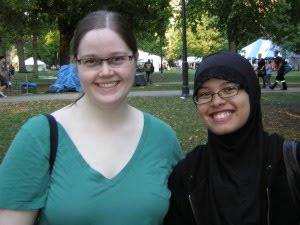 Thanks to everyone who made WOTS possible, including all the exhibitors, publishers, authors, and even fellow readers and bloggers. Hopefully I'll be able to attend next year as well! 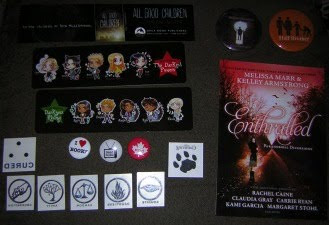 Awesome swag accumulated throughout the day, plus reading buttons I purchased at the WOTS tent