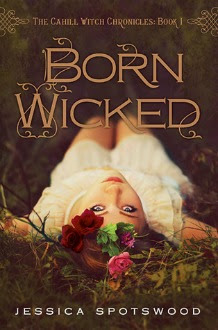 Synopsis: (from Goodreads)
Everybody knows Cate Cahill and her sisters are eccentric. Too pretty, too reclusive, and far too educated for their own good. But the truth is even worse: they’re witches. And if their secret is discovered by the priests of the Brotherhood, it would mean an asylum, a prison ship—or an early grave.

Before her mother died, Cate promised to protect her sisters. But with only six months left to choose between marriage and the Sisterhood, she might not be able to keep her word... especially after she finds her mother’s diary, uncovering a secret that could spell her family’s destruction. Desperate to find alternatives to their fate, Cate starts scouring banned books and questioning rebellious new friends, all while juggling tea parties, shocking marriage proposals, and a forbidden romance with the completely unsuitable Finn Belastra.

If what her mother wrote is true, the Cahill girls aren’t safe. Not from the Brotherhood, the Sisterhood—not even from each other.

My Thoughts:
This book is pretty great for a number of different reasons. The first is the setting, which is an awesome alternate history. I loved how the United States was made up of very different cultural influences than the ones we know, and I loved how it was discussed how the Arab countries were more open and liberal. Plus the history of the witches themselves was fascinating, especially seeing how that course of history made the society into a very strict paternalistic hierarchy. It all seemed very plausible and realistic, which made it all the more interesting.

Another great part of the book is the characters. Cate was pretty amazing despite everything she’s struggled with. She has to deal with the death of her mother and trying to keep her and her sisters safe from the Brothers, but instead of giving up she’s only become stronger. Though we don’t get to know him incredibly well, what we do know of Finn is awesome. I adored how he was bookish and a scholar, but also so fiercely protective of those he loves.

Finally, this book is also great because of the emotions it makes you feel. It’s full of crazy events and manipulation that will make your blood boil. Characters get pushed in directions that they despite just to keep loved ones safe, and while it makes you as a reader so angry, it also keeps you completely engaged.

I honestly can’t believe this is a debut novel, the story was so skillfully told, and the characters felt so three dimensional. I couldn’t put this book down, and I am dying for the next one in the series.