Guest Post: Teresa Lo on The Gateway to Hell

I'm super pleased to be hosting a guest post today from author Teresa Lo. Her book 'Hell's Game' sounds absolutely intriguing, so I asked if Teresa would mind sharing her inspiration for the story. She happily obliged:


Teresa Lo
My Inspiration for Writing HELL’S GAME:
The Legend of The Gateway to Hell in Stull, Kansas
I remember the first time I saw an Ouija Board. My older sister, Alice, had acquired it from a garage sale, and when she brought it into our house, my parents flipped out and demanded she get rid of it...or ELSE. Alice told them she threw it away, but she really stuffed it into a hall closet, where it sat, waiting for several years before someone asked it to come out and play.

When I was in junior high, I dug it out, and my friends and I played with it at a slumber party. My friends asked what boys liked them, and me being a big nerd, I asked what SAT score I would one day get. (For the record, I moved the planchette and gave myself a 1600. This was when a 1600 was a perfect score.) After that night with Ouija, I never tried the game again, even though throughout my teenage years, I experimented with a lot of legends to see if they were real. Bloody Mary. Light as a feather, stiff as a board. Breaking chain mail.

However, there were some things I would never have the guts to try. One of those was to test the legend of the Gateway to Hell in Stull, Kansas, a small town that was only a few hours of a drive away from my hometown of Coffeyville, Kansas.

The way I heard it was that on Halloween night, the Gateway opened, and it was hidden inside of an old church in the middle of the town cemetery. On Earth, there were seven Gateways, portals that demons could enter Earth through and that humans could fall into Hell from. The legitimacy of the legend was confirmed in 1995 when The Pope refused to fly over Stull on one of his trips to the United States. Whether or not the Pope story was true didn’t matter. It was enough to freak me out.

Unlike me, others wanted to dance with the Devil. Like the doomed teenagers in my book Hell’s Game, people actually partied on Halloween night in the cemetery, hoping to see demons emerge. A few even entered the church, and some had the gull to throw bottles at the decrepit old building, hoping to provoke the evil inside of it.

The church mysteriously crumbled in 2002, but the legend will forever live on in Kansas. For years I had been trying to write a story that would incorporate the Gateway and the people who dared to test its truth, and it took me several different versions before I got to Hell’s Game.

In Hell’s Game, a group of popular teenagers pull a prank on the school nerd, Ronnie Smalls, and they convince him to enter an old church in the town cemetery that is rumored to be the Gateway to Hell. To their surprise, the Gateway is real, and demonic hands snatch up Ronnie. Soon after, the group is forced to play a high-stakes game through Hell in order to free Ronnie’s soul and save themselves from the various consequences of their cruelty. I wanted to tell a morality story that was both exciting and true to the legend of Stull, and I really hope readers enjoy it! 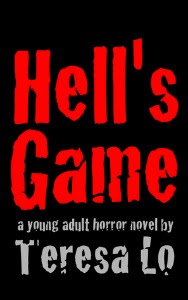 Thanks so much for sharing about your inspiration, Teresa!

How creepy yet awesome does that sound?? It definitely reminds me of something that would happen on an episode of Supernatural (obviously a compliment).

Be sure to add Hell's Game on Goodreads and/or purchase it on Amazon for only 99¢.