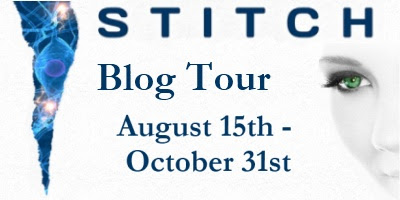 Thanks so much to Ashley for hosting the Stitch Blog Tour today!

Below is a post from Isaac, one of the stars of Stitch, talking about his feelings for Alessa, the main character of the book. Readers have been appreciative of Isaac and Alessa’s unique bond, built on friendship, shared hardships, and the irresistible physical pull between them (no InstaLove here!). Since many readers following the tour have asked to hear more from Isaac, I thought this would be a good opportunity to let him tell more about you how he feels, in his own words. So here you go!

I guess let’s go with the beginning. Alessa and I didn’t have the most conventional start to our relationship. She’s two years older than me, and when we originally met, she was already developing strong feelings for someone who was very close to me. So Alessa was always off-limits and seemingly out-of-reach. I appreciated her from afar for a long time, but never allowed my feelings to go beyond that. It just wasn’t an option.

And so Alessa spent around five years hovering at the periphery of my life. We knew each other only as acquaintances, and only through our mutual connection. I knew from what he said about her that she was smart and dependable – and I could see with my own eyes how beautiful she was – but besides the occasional waved hello or moment of small talk in the common area while we waited for the others in the evening, we kept our interaction to a minimum, both choosing instead to focus the majority of our attentions on the person who connected us.

My memories of finally becoming close to Alessa are bittersweet; we were brought together by tragedy, when we lost that person who meant so much to us both. I was… beyond devastated.

I remember in the immediate aftermath just feeling crushed by loneliness, my chest practically caving under the weight of knowing that he would never return. And that it was my fault. But somehow in those darkest moments, I looked up and found myself in Alessa’s arms. I couldn’t stop myself from crying, and she simply cradled me until the tears subsided, promising all the while that it would be okay. She came out of nowhere, to save me from my own despair, even while she was drowning in her own. She was my rock, and I clung to her, desperately.

Those were not proud moments for me. I wanted to be strong, wanted to fight, wanted to persevere. But I couldn’t. I just couldn’t bring myself to do it. And instead of looking down at me with pity or shame or unease, Alessa showed me only compassion. She understood. She propped me up instead of turning away, reached out instead of collapsing in, and I knew suddenly that I wasn’t really alone – that I would never be again.

From that point forward, Alessa was the best friend I ever had. We joined together to fight back against the forces that had taken our loved one from us, and we learned together and taught each other and relied on each other to be there when no one else could. I quickly fell for her intellect, her confidence, her quiet courage, her loyalty. Not to mention her long limbs, her emerald eyes, her thick gleaming chestnut hair. She was just… she was just something else.

To this day, I’ve never met anyone as capable as Alessa. She’s resourceful and quick and brave. Yes, she can be moody, sometimes doubting herself and sometimes a little overconfident, and as a result, sometimes she makes mistakes. But she also takes responsibility for those mistakes, and does what she can to set them right. She steps up when no one else will, and she’s brave when no one else can find it in themselves to be. She has an amazing spirit, just unbreakable, like a diamond. I love Alessa, but I also admire her. She’s everything I ever wanted to be.

I guess what it comes down to is that Alessa makes me feel secure in a world where nothing is really safe anymore. I trust her more than I’ve ever trusted anyone – more than I even trust myself – because I know she’s always looking out for me first, the same way she did the very first day we embraced. She’s just absolutely stunning, inside and out, she makes me feel alive, and she reminds me every day that there is something out there worth fighting for. There’s nothing I would not do for Alessa. And I know she’d say the same for me. She’s just it – she’s all I’ll ever need.

Aww... gotta love a guy who knows what he feels and isn't ashamed to share it. Samantha has let me know that there's an accompanying piece from Alessa's perspective on Reading and Writing Urban Fantasy, so be sure to check that out if you're interested.

Samantha Durante lives in New York City with her husband, Sudeep, and her cat, Gio. Formerly an engineer at Microsoft, Samantha left the world of software in 2010 to pursue her entrepreneurial dreams and a lifelong love of writing. A graduate of the University of Pennsylvania’s Jerome Fisher Program in Management & Technology, Samantha is currently working full time for her company Medley Media Associates as a freelance business writer and communications consultant. Stitch is her first novel. Learn more about Samantha at www.samanthadurante.com. 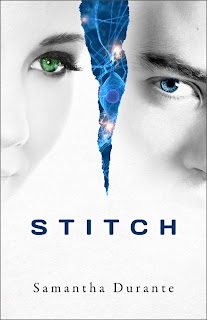 Synopsis: (from author's site)
Her heart races, her muscles coil, and every impulse in Alessa’s body screams at her to run… but yet she’s powerless to move.

Still struggling to find her footing after the sudden death of her parents, the last thing college freshman Alessa has the strength to deal with is the inexplicable visceral pull drawing her to a handsome ghostly presence. In between grappling with exams and sorority soirees – and disturbing recurring dreams of being captive in a futuristic prison hell – Alessa is determined to unravel the mystery of the apparition who leaves her breathless. But the terrifying secret she uncovers will find her groping desperately through her nightmares for answers.

Because what Alessa hasn’t figured out yet is that she’s not really a student, the object of her obsession is no ghost, and her sneaking suspicions that something sinister is lurking behind the walls of her university’s idyllic campus are only just scratching the surface…

The opening installment in a twist-laden trilogy, Stitch spans the genres of paranormal romance and dystopian sci-fi to explore the challenges of a society in transition, where morality, vision, and pragmatism collide leaving the average citizen to suffer the results.

My Thoughts:
What really attracted me to this story to begin with was the new adult/college angle. I love those types of settings, so I was interested in that, and I was also curious as to where things would go from there, since I was promised a story that wasn’t what it seemed. I have to say I loved how interesting and twisty this book is. It starts off a bit like a paranormal romance might, but you’re never quite sure what’s going on. Slowly the book transforms into something entirely different, and it was both surprising and awesome.

While I liked the book, I can’t say I’m in love with it, mostly because I wasn’t wholly invested in the characters. I think it’s because of a lack of background; as a reader we’re sort of just thrown into a situation with them, which is exciting, but doesn’t necessarily create an emotional connection. Despite the fact that I didn’t fully connect with the characters, I do really love the concept of the book. It was inventive and unique, which isn’t something that you can say very often. If you’re looking for a cross-genre book that offers something fresh, then be sure to check out ‘Stitch’.

The Cover:
Not my fave, but it is interesting.