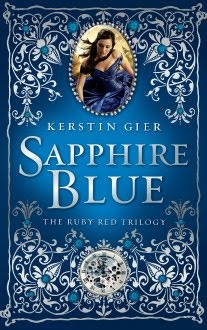 Synopsis: (from Goodreads)
Gwen’s life has been a rollercoaster since she discovered she was the Ruby, the final member of the secret time-traveling Circle of Twelve. In between searching through history for the other time-travelers and asking for a bit of their blood (gross!), she’s been trying to figure out what all the mysteries and prophecies surrounding the Circle really mean.

At least Gwen has plenty of help. Her best friend Lesley follows every lead diligently on the Internet. James the ghost teaches Gwen how to fit in at an eighteenth century party. And Xemerius, the gargoyle demon who has been following Gwen since he caught her kissing Gideon in a church, offers advice on everything. Oh, yes. And of course there is Gideon, the Diamond. One minute he’s very warm indeed; the next he’s freezing cold. Gwen’s not sure what’s going on there, but she’s pretty much destined to find out.

My Thoughts:
I really enjoyed ‘Ruby Red’, so I was very excited to read this second installment in the trilogy. I love the 'secret time travel society' concept of this series, and I just adore all the details of this that are included in the book. There are secrets and prophecies, and historical elements from the time travel. I thought it was so cool how details from the first book came into play and started to make sense -- it’s great when authors can tie details together like that.

I love the main character, Gwen, because she’s so strong and intelligent. The author also lets her be a typical teenager girl who’s going through something insane and has a crush on a boy, which is great. Gwen questions herself and questions Gideon’s feelings just like any normal girl would. I also loved Gwen’s Nancy Drew-esque friend Lesley, and their friendship. So often strong friendship is missing from YA novels if the novel itself isn’t about that friendship, so I was happy to see a good example here.

While I adored the Gwen/Gideon dynamic from the first novel, I have to say that I wasn’t feeling it here. Some aspects of the relationship seemed to happen way too quickly, and Gideon drove me crazy. He was far too hot and cold with mixed signals for my liking.

Another minor negative point is that while everything moved forward a bit, it didn’t really feel like much actually happened. It definitely felt like a Book 2 that was leading into a Book 3, rather than a book that could stand on its own as part of a series. However I definitely liked this one enough that it makes me curse the fact that I don’t know German, because I’m definitely itching to find out what happens in the next and final installment of the trilogy. While not every element of this book lived up to my expectations, the awesome time travel society definitely makes this book (and trilogy) one worth checking out.

The Cover:
Love it! I'm confused as to what cover is the final cover, though. Is this the paperback cover & the one above the hardback cover? Inquiring minds need to know. Melissa at Raincoast is my hero because she's confirmed that the beauty up there is the hardcover cover, and the full body girl is the paperback cover... so yay, they all match.