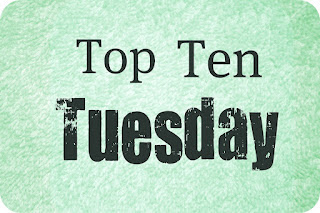 Top Ten Tuesday is a weekly feature hosted by The Broke and the Bookish.
Top Ten Favorite Kick-Ass Heroines
In no particular order...

1. Aura from Shade series by Jeri Smith-Ready:
Aura is smart, funny, brave, and just an all around great person.

2. Elisa from The Girl of Fire & Thorns series by Rae Carson:
Elisa is just so BRAVE and STRONG. She has been through so much, but she will do anything to protect her country and those she loves.

3. Anna from Anna and the French Kiss by Stephanie Perkins:
Anna is kind of an "every girl", but I love how she grows throughout the book. She has a vision for her future, and she learns to embrace her new situation.

4. Frankie Landau-Banks from The Disreputable History of Frankie Landau-Banks by E. Lockhart:
There are very few characters that I adore as much as Frankie. I love her girl power and how completely brilliant she is, and I also appreciate how E. Lockhart has made her down to earth in so many ways (e.g. wanting her BF to like her, but to like her as a respected individual as well).

5. Raisa from The Seven Realms series by Cinda Williams Chima:
Raisa is so kick butt. She'll run away from a forced marriage, learn how to fight, and will protect her country with everything she's got.

6. Saba from Dustlands series (Blood Red Road) by Moira Young:
I absolutely love Saba. She's so prickly and unlikable to start with, but I love how as the book goes on she grows to care about others besides Lugh. She's so fierce, but she's kind of a marshmallow inside (though she'd probably kill you if you pointed that out).

7. Rose from Vampire Academy series by Richelle Mead:
Rose is a kick-ass heroine who is physically strong, but is also funny, loyal, and smart. I feel like she defies a lot of the stereotypes that surround strong female characters.

8. Katsa from Graceling by Kristin Cashore:
Man, Katsa is so fierce. She's been through so much in her life, yet she is still an inherently good person. She fights to protect those who have been wronged, and uses her grace to do so. I love how Katsa always remains true to herself.

9. Gabi from The River of Time series by Lisa T. Bergren:
Gabi is intelligent and brave, and she faces her fears in order to save her sister and protect those she cares about. Gabi really tries to deal with the situation she's put in, while also making the most of it.

10. Ember from Article 5 series by Kristen Simmons:
Ember is a bit naive in the first book, but by the 2nd she's definitely come into her own. I love how strong Ember remains, and how she's willing to fight for the right thing, even after she's been through so much.