Promise Me This by Christina Lee 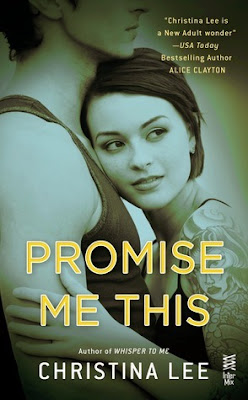 A new love will test the boundaries of passion between a privileged boy next door and the tattooed, blue-haired girl who helps him embrace his wild side...

Nate has developed quite a playboy reputation around campus. It's not that he doesn't respect or trust women; he doesn't trust himself. The men in Nate’s family are prone to abusive behavior—a dirty secret that Nate’s been running from his entire life—so Nate doesn't do relationships. But he can’t help himself around one girl…

Jessie is strong, independent, and works at a tattoo parlor. Nate can’t resist getting close to her, even if it’s strictly a friendship. But it doesn't take long for Nate to admit that what he wants with Jessie is more than just friendly.

With Jessie, he can be himself and explore what he’s always felt was a terrifying darkness inside him. Even when Nate begins to crave her in a way that both shocks and horrifies him, Jessie still wants to know every part of him. Testing their boundaries together will take a trust that could render them inseparable… or tear them apart.

My Thoughts:
Promise Me This is another great New Adult novel from Christina Lee. I thought this book was a really beautiful story about self acceptance. What I love about Christina’s books is that they send great messages without being the type of book that knocks you over the head with it.

One thing that stood out for me in Promise Me This, and that I really appreciated, is that it sent a very strong positive recommendation for therapy. I loved how Jessie suggested therapy to Nate, sending him the message that you’re not weak for seeking help. I liked that the characters recognized that talking things out in general is great, but that talking to a professional can help you in even more ways.

Jessie is a tattoo covered girl who’s very emotionally strong, probably because of the strong support system she’s always had. She’s a very sweet girl who is friends with Nate long before any kind of romantic or sexual feelings develop between them. Jessie doesn’t see herself with a preppy guy, but a particular incident makes her start thinking differently about Nate. I loved Jessie’s passion for photography, which was passed down from her recently deceased father, and how she honoured her father by using his camera.

Nate is generally a good guy. He first appears as the typical manwhore character, but he’s definitely a lot more than that. He’s a good guy who doesn’t see himself as that. He’s a very vulnerable character, still suffering from the abuse that his father has targeted on their family, but especially on Nate’s mother. Nate fears becoming like his father, especially because of his sexual predilections.

What’s great about Christina Lee's books is that they feel very realistic. The characters are layered, and the situations seem true to life. In this vein, I liked how there wasn't any easy answers for Nate when it came to his personal life or with his family situation. It was a definite process, both with learning to accept his sexual tastes and in realizing that the only person he can control is himself. It was lovely to see Nate make peace with his situations and to see Jessie encourage Nate while letting him find his own path.

Overall I definitely recommend Promise Me This. It’s a steamy love story with a strong emotional base, and I think all romance fans will find something to enjoy in it.